More than 18 million youth see e-cigarette ads; many ads use themes from cigarette ads that appeal to youth 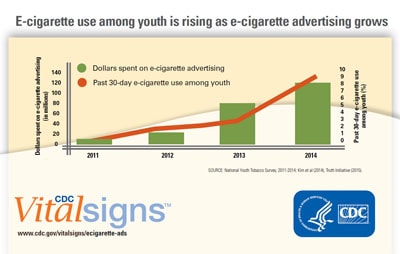 About 7 in 10 middle and high school students – more than 18 million young people – see e-cigarette advertising in stores, online, in newspapers and magazines, or on television and in movies, according to a new CDC Vital Signs report.

E-cigarette ads use many of the same themes – independence, rebellion, and sex – used to sell cigarettes and other conventional tobacco products. Advertising of tobacco products has been shown to cause youth to start using those products. The unrestricted marketing of e-cigarettes and dramatic increases in their use by youth could reverse decades of progress in preventing tobacco use among youth.

“The same advertising tactics the tobacco industry used years ago to get kids addicted to nicotine are now being used to entice a new generation of young people to use e-cigarettes,” said CDC Director Tom Frieden, M.D., M.P.H. “I hope all can agree that kids should not use e-cigarettes.”

E-cigarettes typically deliver nicotine, which at a young age may cause lasting harm to brain development, promote addiction, and lead to sustained tobacco use. In 2014, e-cigarettes became the most commonly used tobacco product among youth, surpassing conventional cigarettes. During 2011 to 2014, current e-cigarette use among high school students soared from 1.5 percent to 13.4 percent, and among middle school students from 1.6  percent to 3.9 percent. Spending on e-cigarette advertising rose from $6.4 million in 2011 to an estimated $115 million in 2014.

Strategies to reduce youth access to e-cigarettes could include:

“States and communities can also help reduce youth tobacco use by funding tobacco prevention and control programs that address the diversity of tobacco products available on the market, including e-cigarettes,” said Corinne Graffunder, Dr.P.H., director of CDC’s Office on Smoking and Health. “We know what works to effectively reduce youth tobacco use. If we were to fully invest in these proven strategies, we could significantly reduce the staggering toll that tobacco takes on our families and communities.”

Other key findings in the Vital Signs report show that:

The 2009 Family Smoking Prevention and Tobacco Control Act gave the Food and Drug Administration (FDA) authority to regulate the manufacture, marketing, and sale of certain tobacco products. FDA has announced its intention to regulate e-cigarettes and other currently unregulated tobacco products as part of this Act. The rulemaking is currently under review at the Office of Management and Budget.

Vital Signs is a report that appears on the first Tuesday of the month as part of the CDC journal Morbidity and Mortality Weekly Report. The report provides the latest data and information on key health indicators. These include cancer prevention, obesity, tobacco use, motor vehicle passenger safety, prescription drug overdose, HIV/AIDS, alcohol use, health care-associated infections, cardiovascular health, teen pregnancy, food safety, and viral hepatitis.