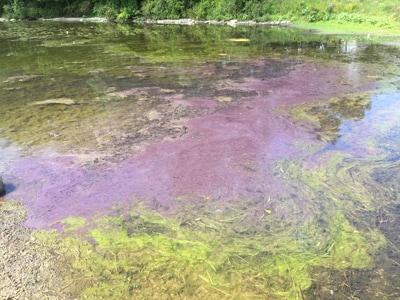 Evidence suggests that harmful algal blooms are increasing in frequency and severity as a result of climate change, farming practices, storm and wastewater runoff, and other environmental issues. Rapid growth of algae can create harmful blooms that produce toxins that get into the air, water, or food, or severely deplete oxygen in bodies of water. These blooms can harm animals, people, and the local ecology. OHHABS will help health officials understand the severity and extent of illnesses caused by harmful algal blooms in people and animals and the effect they have on the environment. This information will support efforts to prevent harmful algal blooms and the illnesses they cause.

CDC’s new webpage on harmful algal blooms can be found at www.cdc.gov/habs.

Toxins released by harmful algal blooms can cause a variety of illnesses in people or animals. Breathing in these toxins can cause coughing or respiratory problems, and swimming in water with a harmful algal bloom can cause skin rashes or other symptoms. People also can get sick from eating fish or shellfish or drinking tap water contaminated with the toxins.

Harmful algal blooms are considered a One Health issue. The One Health concept recognizes that the health of people is connected to the health of animals and the environment. More about One Health can be found here: http://www.cdc.gov/onehealth/.