Approximately 1 in 4 gay, bisexual men; 1 in 5 people who inject drugs; and 1 in 200 heterosexuals should be counseled about pre-exposure prophylaxis (PrEP) 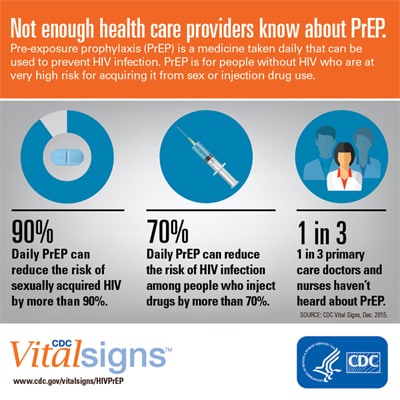 A new Vital Signs report published today estimates that 25 percent of sexually active gay and bisexual adult men, nearly 20 percent of adults who inject drugs, and less than 1 percent of heterosexually active adults are at substantial risk for HIV infection and should be counseled about PrEP, a daily pill for HIV prevention.

PrEP for HIV prevention was approved by the Food and Drug Administration in 2012. When taken daily, it can reduce the risk of sexually acquired HIV by more than 90 percent. Daily PrEP can also reduce the risk of HIV infection among people who inject drugs by more than 70 percent. However, according to recent studies, some primary health care providers have never heard of PrEP. Increasing awareness of PrEP and counseling for those at substantial risk for HIV infection is critical to realizing the full prevention potential of PrEP.

“PrEP isn’t reaching many people who could benefit from it, and many providers remain unaware of its promise,” said CDC Director Tom Frieden, M.D., M.P.H. “With about 40,000 HIV infections newly diagnosed each year in the U.S., we need to use all available prevention strategies.”

While PrEP can fill a critical gap in America’s prevention efforts, all available HIV prevention strategies must be used to have the greatest impact on the epidemic. These include treatment to suppress the virus among people living with HIV; correct and consistent use of condoms; reducing risk behaviors; and ensuring people who inject drugs have access to sterile injection equipment from a reliable source.

“PrEP has the potential to dramatically reduce new HIV infections in the nation,” says Jonathan Mermin, M.D., M.P.H, director of CDC’s National Center for HIV/AIDS, Viral Hepatitis, STD, and TB Prevention. “However, PrEP only works if patients know about it, have access to it, and take it as prescribed.”

A separate analysis published today in Vital Signs suggests that focused efforts can significantly expand the reach of PrEP. Researchers from the New York State Department of Health report that PrEP use among New Yorkers covered by Medicaid increased from 303 prescriptions filled from July 1, 2013, through June 30, 2014, to 1,330 prescriptions filled from July 1, 2014, through June 30, 2015 in the year following the launch of a statewide effort to increase PrEP knowledge among potential prescribers and candidates.

PrEP is one of four focus areas in the July 2015 Update to the National HIV/AIDS Prevention Strategypdf iconexternal icon. Other key elements of the Strategy and CDC’s high-impact prevention approach are:

“Today’s prevention landscape is complex and with the wide range of strategies now available, no single tool addresses every prevention need. Reducing the toll of HIV in this nation will require matching the right tools to the right people,” said Eugene McCray, M.D., director of CDC’s Division of HIV/AIDS Prevention. “Providers must work with patients to assess which tools best meet their needs. PrEP can benefit many who have high risk. Other risk reduction strategies, such as condoms and access to sterile injection equipment, also offer substantial protection when used consistently and correctly.”

In March, CDC announced it is awarding up to $125 million in HIV prevention funding over three years to state and local health departments, in part to expand the use of PrEP for men who have sex with men (MSM). In July, CDC announced it had awarded $216 million over five years to 90 community-based organizations (CBOs) nationwide to increase access to PrEP prevention and support services and other effective HIV prevention strategies among those at greatest risk, including men who have sex with men and people who inject drugs.

CDC has also published resources to educate and advise providers – including 2014 clinical guidelines, step-by-step PrEP checklists and interview guides – and supports a hotline to answer providers’ questions about when and how to offer PrEP.