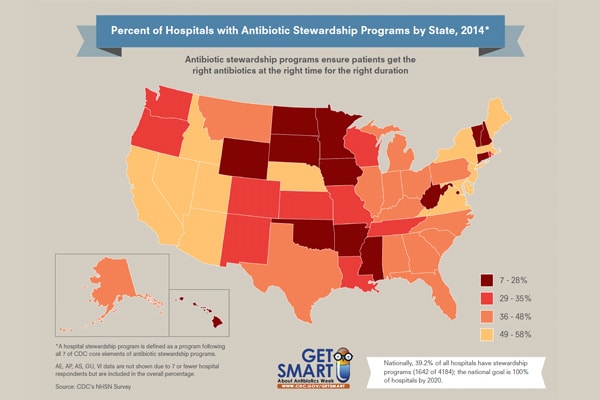 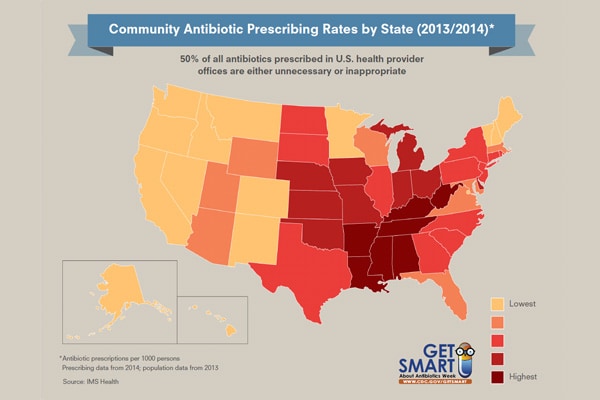 The President has proclaimed Nov. 16-22 “Get Smart About Antibiotics Week.”    Get Smart Week builds on the momentum generated at the White House Forum on Antibiotic Stewardship, where more than 150 organizations pledged to improve antibiotic use and slow the spread of antibiotic resistance.

Antibiotic resistance – the rise of deadly germs no longer stopped by the drugs that once controlled them – threatens to take us back to the days when minor infections commonly killed.

CDC estimates that each year two million Americans get an infection with an antibiotic-resistant bacteria. Every year 23,000 of those patients die. CDC has made combating antibiotic resistance a top priority and is partnering with public institutions and private industry to overcome this challenge. It is critical to use these life-saving drugs when truly necessary, such as when treating patients with sepsis, while also using the right drug at the right dose and duration to  protect the effectiveness of antibiotics.

“Antibiotic resistance is one of the deadliest health threats facing the world,” said CDC Director Tom Frieden, M.D., M.P.H. “These pledges will help protect the antibiotics we have so we can use these miracle drugs to save lives for years to come.”

State health departments, non-profit partners, industry partners, healthcare workers, and parents all have an important role in the fight against antibiotic resistance.

CDC is working to track antibiotic use and the spread of antibiotic-resistant infections in the U.S.  We are also exploring new ways to stop the rise of antibiotic resistance. The agency encourages clinicians to improve prescribing habits and patients to ask their providers if antibiotics are truly needed for their care. CDC data are used to identify hotspots in need of attention, and the CDC-run isolate bank assists industry partners working to develop new antibiotics and rapid diagnostic tests, contributing to the global effort to combat antibiotic resistance.

“All of us can take action. The way we use antibiotics today impacts how useful they will be tomorrow.  We all have a responsibility to be vigilant: consumers, parents, healthcare providers, hospitals, governments. We are especially pleased that many organizations and companies are joining the ranks to promote public awareness,” says Lauri Hicks, D.O., director of CDC’s Office of Antibiotic Stewardship.

Everyone can take action to improve antibiotic prescribing and antibiotic use: