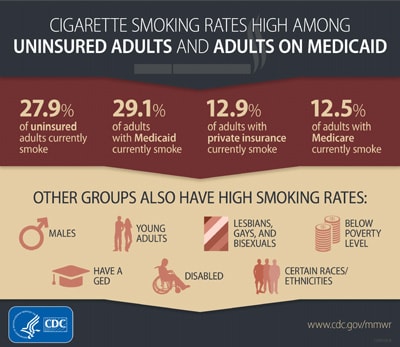 American adults who are uninsured or on Medicaid smoke at rates more than double those for adults with private health insurance or Medicare, according to a study published by the Centers for Disease Control and Prevention in today’s Morbidity and Mortality Weekly Report (MMWR).

The study reported that the prevalence of cigarette smoking among U.S. adults declined from 20.9 percent to 16.8 percent from 2005 to 2014, including a full percentage-point decline between 2013 and 2014 alone. The considerable drop in the overall adult smoking rate over time shows marked progress toward achieving the Healthy People 2020 goal of reducing the cigarette smoking rate to 12 percent or lower. Another major finding was that the average number of cigarettes smoked per day among daily smokers declined from 16.7 in 2005 to 13.8 in 2014 — driven by declines in the proportion of daily smokers who smoked 20 or more cigarettes per day.

The study found other differences in smoking rates consistent with previous studies. In 2014, prevalence of cigarette smoking was higher among these groups:

“These findings underscore the importance of ensuring that proven strategies to prevent and reduce tobacco use reach the entire population, particularly vulnerable groups,”said Brian King, Ph.D., deputy director for research translation, CDC Office on Smoking and Health. “Comprehensive smoke-free laws, higher prices for tobacco products, high-impact mass media campaigns, and barrier-free access to quitting help are all important. They work to reduce the enormous health and financial burden of tobacco use and secondhand smoke exposure among Americans.”

Changes in the U.S. health-care system continue to offer opportunities to improve the use of clinical preventive services among adults. The Patient Protection and Affordable Care Act of 2010 is increasing the number of Americans with health insurance and is expected to improve tobacco cessation coverage.

For more information about cigarette smoking and tools to quit, visit www.cdc.gov/tobacco.