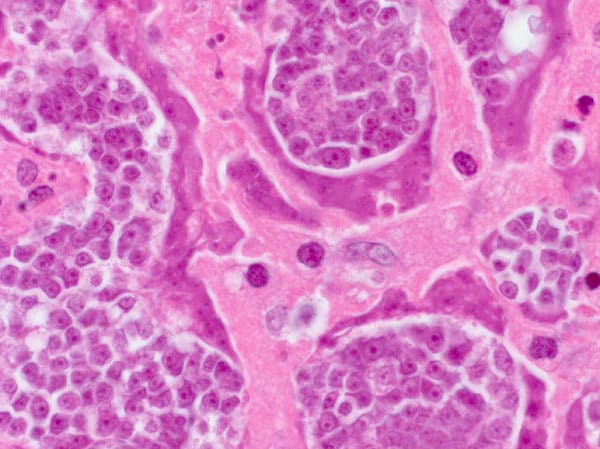 Scientists at the Centers for Disease Control and Prevention have discovered cancer cells originating in a common tapeworm may take root in people with weakened immune systems, causing cancer-like tumors. It is the first known case of a person becoming ill from cancer cells that arose in a parasite – in this case, Hymenolepis nana, the dwarf tapeworm.

The report, in the Nov. 5 issue of the New England Journal of Medicine, raises concern that other similar cases, if they occur, may be misdiagnosed as human cancer – especially in less developed countries where this tapeworm and immune-system-suppressing illnesses like HIV are widespread.

“We were amazed when we found this new type of disease – tapeworms growing inside a person essentially getting cancer that spreads to the person, causing tumors,” said Atis Muehlenbachs, M.D., Ph.D., staff pathologist in CDC’s Infectious Diseases Pathology Branch (IDPB) and lead author of the study. “We think this type of event is rare. However, this tapeworm is found worldwide and millions of people globally suffer from conditions like HIV that weaken their immune system. So there may be more cases that are unrecognized. It’s definitely an area that deserves more study.”

In 2013, doctors in Colombia asked CDC to help diagnose bizarre biopsies from lung tumors and lymph nodes of a 41-year-old man who was HIV positive. The tumors looked similar to a human cancer, but initial CDC lab studies revealed the cancer-like cells were not human. That revelation kicked off a nearly three-year hunt for the cause of the man’s illness.

Researchers with IDPB, the CDC unit dedicated to investigating cases of unexplained illness and death, initially questioned whether it was an unusual cancer or an unknown infection. The growth pattern was decidedly cancer like, with too many cells crowded into small spaces and quickly multiplying. But the cells were tiny – about 10 times smaller than a normal human cancer cell. The researchers also noticed cells fusing together, which is rare for human cells.

Figuring out how to help a patient who suffers from a similar ailment could be tricky for doctors – drugs to treat tapeworm infections may not be effective against tapeworm cancer cells in people. It is not clear whether human cancer treatments would help, although researchers think they might be beneficial. Physicians in developing nations should be aware of the possibility of similar illnesses, especially if they have patients with weakened immune systems who have tumors.

The most common tapeworm in humans

H. nana infects up to 75 million people at any given time, making it the most common tapeworm infection in humans. People get the tapeworm by eating food contaminated with mouse droppings or insects or by ingesting feces from someone else who is infected. Children are most often affected. Most people show no symptoms. However, in people whose immune systems are weak, including people who have HIV or are taking steroids, the tapeworm thrives.

Some 3,000 kinds of tapeworms are known to infect animals. But H. nana is the only one that can complete its entire lifecycle from egg to adult tapeworm within an individual’s small intestine. This can lead to large numbers of H. nana in the intestine, especially in people with weakened immune systems whose bodies have a harder time fighting the parasite. Researchers theorize that the mechanism that allows parasites like H. nana to avoid human immune systems may also have allowed the tapeworm’s cells to proliferate unchecked in the Colombian man.

H. nana infection is most common in areas where sanitation and handwashing are challenging. When traveling in less developed areas, people should protect themselves by washing their hands with soap and warm water and by washing, peeling, or cooking all raw vegetables and fruits with safe water before eating.

The study investigated tapeworms from the collections of the Natural History Museum in London. Peter D. Olson, Ph.D, a researcher and tapeworm expert at the Natural History Museum in London, provided information about the worms’ genetic data and helped interpret results. He said, “This study is an example of natural history and public health experts working together to uncover fascinating new details about the natural world. It represents an enormous advance in our knowledge and raises questions about the conditions under which cells may become cancerous.”