Government and food industries can work together to make food safer 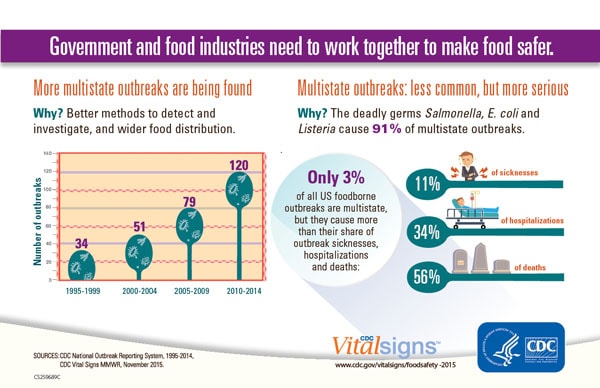 Multistate outbreaks cause more than half of all deaths in foodborne disease outbreaks despite accounting for only a tiny fraction (3 percent) of reported outbreaks in the United States, according to a new Vital Signs report released today by the Centers for Disease Control and Prevention (CDC).

“Americans should not have to worry about getting sick from the food they eat,” said CDC Director Tom Frieden, M.D., M.P.H. “Top-notch epidemiology and new gene sequencing tools are helping us quickly track down the source of foodborne outbreaks – and together with our national partners we are working with the food industry to prevent them from happening in the first place.”

The Vital Signs report analyzed data from CDC’s Foodborne Disease Outbreak Surveillance System during 2010-2014. CDC scientists compared the number of illnesses, hospitalizations and deaths from outbreaks in two or more states with those from outbreaks that occurred in a single state. They found that the 120 multistate outbreaks during the five-year study period were responsible for 11 percent of all foodborne outbreak illnesses, 34 percent of hospitalizations and 56 percent of deaths. An average of 24 multistate outbreaks occurred each year, involving two to 37 states.

Other highlights from the report on multistate foodborne outbreaks during 2010-2014 include:

The Vital Signs report recommends that local, state, and national health agencies work closely with food industries to understand how their foods are produced and distributed to speed multistate outbreak investigations. These investigations can reveal fixable problems that resulted in food becoming contaminated and lessons learned that can help strengthen food safety.

The report highlights the need for food industries to play a larger role in improving food safety by following best practices for growing, processing, and shipping foods. In addition, food industries can help stop outbreaks and lessen their impact by keeping detailed records to allow faster tracing of foods from source to destination, by using store loyalty cards to help identify which foods made people sick, and by notifying customers of food recalls.

Under the 2011 FDA Food Safety Modernization Act, the Food and Drug Administration (FDA) is developing new regulations that  will not only require importers to verify that their suppliers are meeting U.S. food safety standards, but will hold both domestic and foreign companies accountable for preventing foodborne illness before it occurs. Final regulations for preventive controls were announced in September, and additional regulations covering produce, imported foods, intentional adulteration and sanitary transportation are expected in coming months.

“The continued partnership of FDA, CDC, USDA and our partners at the state and local levels is essential to responding to foodborne outbreaks. But consumers should be able to have confidence that steps are being taken from farm to table to minimize the risk of illness from the food they feed their families,” said FDA Deputy Commissioner for Foods and Veterinary Medicine, Michael R. Taylor.  “By continuing to work with our government partners and industry, we can build a food safety system and culture focused on prevention.”

Over the past six years, the U.S. Department of Agriculture (USDA) has taken an increasingly science-based approach to preventing foodborne illness, relying heavily on available data, trends, and technological advances.

“The USDA Food Safety and Inspection Service’s top priority is preventing multistate foodborne illness outbreaks from occurring. As we look toward the future, USDA will continue to work with FDA, CDC, industry, and the states to advance our science-based approach to food safety,” said Phillip Derfler, USDA Deputy Administrator for the Food Safety and Inspection Service. “By focusing on collaboration and modernization, we are confident that there will be a decline in multistate outbreaks.”

For information on food recalls and to learn more about how to safely handle and prepare food, consumers can check www.foodsafety.gov. They can also consider getting and using store loyalty cards so stores can contact them if they purchase a recalled product.