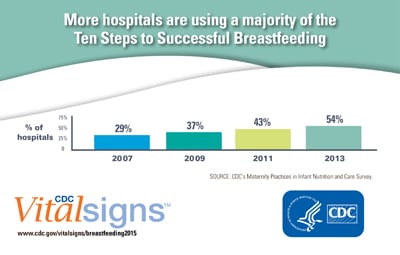 “Breastfeeding has immense health benefits for babies and their mothers,” said CDC Director Tom Frieden, M.D., M.P.H.  “More hospitals are better supporting new moms to breastfeed — every newborn should have the best possible start in life.”

Of the nearly four million babies born each year in the U.S., 14 percent are born in Baby-Friendly hospitals, a number that has nearly tripled in recent years, but remains low. The Baby-Friendly Hospital Initiative (BFHI) was established by the World Health Organization and UNICEF and endorsed by the American Academy of Pediatrics. The core of the BFHI is the Ten Steps to Successful Breastfeeding.

“What happens in the hospital can determine whether a mom starts and continues to breastfeed, and we know that many moms – 60 percent – stop breastfeeding earlier than they’d like,” said Cria Perrine, PhD, epidemiologist in CDC’s Division of Nutrition, Physical Activity and Obesity. “These improvements in hospital support for breastfeeding are promising, but we also want to see more hospitals fully supporting mothers who want to breastfeed. The Ten Steps help ensure that mothers get the best start with breastfeeding.”

This Vital Signs report examined data from CDC’s national survey, Maternity Practices in Infant Nutrition and Care (mPINC), which measures the percentage of U.S. hospitals with practices that are consistent with the Ten Steps to Successful Breastfeeding. The Ten Steps are measures of a hospital’s breastfeeding support before, during, and after a mother’s hospital stay. Some of the steps include:

Other encouraging findings from the report include:

Other mPINC data show why continued improvement is needed:

There are specific actions hospitals can take to better support mothers to breastfeed. These actions include:

There are many health benefits to breastfeeding. Babies that are breastfed have reduced risks for ear, respiratory, stomach and intestinal infections. They also are at lower risk of asthma, obesity, and sudden infant death syndrome (SIDS). Pre-term infants are at a particularly high risk of necrotizing enterocolitis, a disease that affects the stomach and intestinal tract; breastfeeding can protect infants from this disease.

Breastfeeding also saves money. More than $2 billion in yearly medical costs for children could be saved if breastfeeding recommendations were met.