New data show importance of addressing all forms of tobacco use, including flavored products 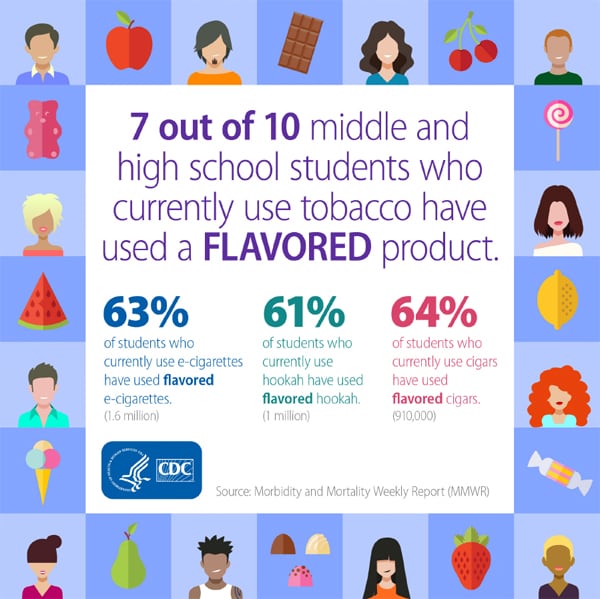 7 out of 10 middle and high school students and who currently use tobacco have used a flavored product.
Full infographic

An estimated 70 percent of U.S. middle and high school students who have used a tobacco product in the past 30 days have used at least one flavored tobacco product during this period, according to a study published by the Centers for Disease Control and Prevention (CDC) and the Food and Drug Administration (FDA) in today’s Morbidity and Mortality Weekly Report (MMWR).

“Flavored tobacco products are enticing a new generation of America’s youth into nicotine addiction, condemning many of them to tobacco-related disease and early death,” said CDC Director Tom Frieden, M.D., M.P.H.  “Nicotine is not safe for the developing brain, and we must do everything we can to protect kids from a lifetime of tobacco use and nicotine dependence.”

Sustained efforts to implement proven tobacco control programs and policies are necessary to prevent all forms of tobacco use, including use of flavored tobacco products, among U.S. youth. For example, several local jurisdictions, including New York City, Chicago, Providence (Rhode Island), and Santa Clara (California), have acted to limit or restrict sales of flavored tobacco products in these communities.