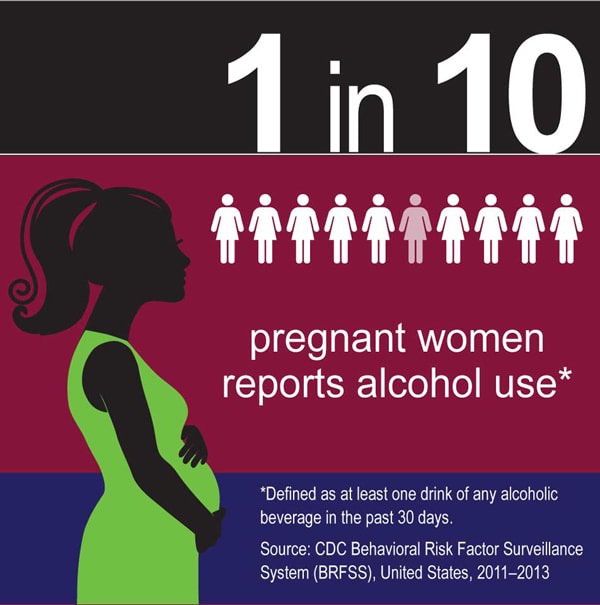 1 in 10 pregnant women reports alochol use*
*Defined as at least one drink of any alcoholic beverage in the past 30 days.
Source: CDC Behavioral Risk Factor Surveillance System (BRFSS), United states 2011-2013

One in 10 (10.2 percent) pregnant women in the United States ages 18 to 44 years reports drinking alcohol in the past 30 days. In addition, 3.1 percent of pregnant women report binge drinking – defined as 4 or more alcoholic beverages on one occasion. This means that about a third of women who consume alcohol during pregnancy engage in binge drinking according to a report in CDC’s Morbidity and Mortality Weekly Report (MMWR).

“We know that alcohol use during pregnancy can cause birth defects and developmental disabilities in babies, as well as an increased risk of other pregnancy problems, such as miscarriage, stillbirth, and prematurity,” said Coleen Boyle, Ph.D., director of CDC’s National Center on Birth Defects and Developmental Disabilities. “This is an important reminder that women should not drink any alcohol while pregnant. It’s just not worth the risk.”

The study used data from CDC’s Behavioral Risk Factor Surveillance System (BRFSS), a state-based, landline and cell phone survey of the U.S. population. To estimate the prevalence of alcohol use and binge drinking, researchers used 2011-2013 BRFSS data for all 50 states and the District of Columbia for women aged 18-44 years.

Among pregnant women, alcohol use was highest among:

The prevalence of any alcohol use and binge drinking among pregnant and non-pregnant women is slightly higher than estimates reported for 2006-2010. However, this is likely due to methodological changes to the BRFSS in 2011, such as the addition of cell phone surveys, rather than actual shifts in the prevalence of alcohol use.

“Women who are pregnant or might be pregnant should be aware that there is no known safe level of alcohol that can be consumed at any time during pregnancy. All types of alcohol should be avoided, including red or white wine, beer, and liquor,” said Cheryl Tan, M.P.H., lead author of the study and an epidemiologist in CDC’s National Center on Birth Defects and Developmental Disabilities.

CDC works to prevent alcohol-exposed pregnancies and FASDs through a variety of activities including: