Cigarette use going down while smokeless use going up 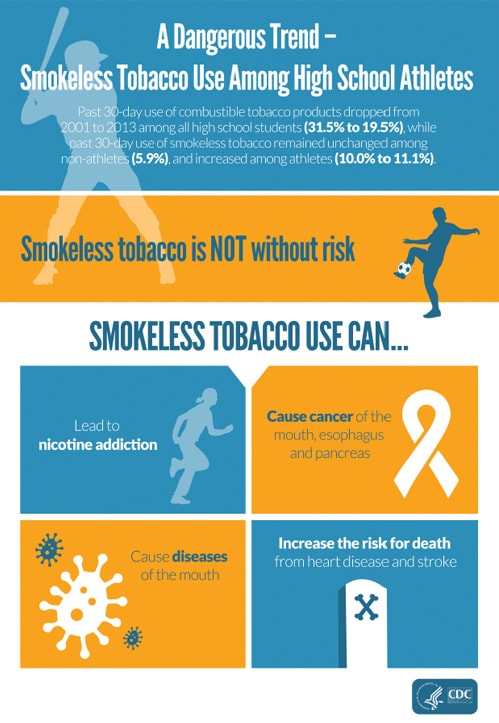 High school athletes who play on sports teams smoke tobacco products at a lower rate than non-athletes, but use smokeless tobacco at a higher rate, according to a study published by the Centers for Disease Control and Prevention in today’s Morbidity and Mortality Weekly Report (MMWR).

Data from national Youth Risk Behavior Surveys (YRBS) show that while current use of combustible tobacco products (cigarettes and cigars) dropped dramatically from 2001 to 2013 among all high school students (31.5 percent to 19.5 percent), current use of smokeless tobacco remained unchanged among non-athletes (5.9 percent) and increased among athletes (10 percent to 11.1 percent).

The lower use of combustible tobacco products might result from athletes’ awareness of how smoking can hurt athletic performance. The higher use of smokeless tobacco suggests athletes may perceive these products as harmless, socially acceptable, or perhaps even as a way to boost athletic performance. However, smokeless tobacco contains nicotine and cancer-causing chemicals and may increase the risk of death from heart disease and stroke. Notable athletes with a history of smokeless tobacco use have been diagnosed with or died from oral cancer.

“We can do more to protect America’s youth from a lifetime of addiction,” said CDC Director Tom Frieden, M.D., M.P.H. “The fact is, smokeless tobacco products, such as chewing tobacco, snuff or dip, can cause cancer of the mouth, esophagus and pancreas. And the nicotine in these products is harmful to the developing brain. Because we know tobacco-free policies in schools and other public recreational areas work, we must take action now so that our children are safe from these toxins.”

The tobacco industry has marketed smokeless products as an alternative to cigarettes in situations where smoking is prohibited, which might further promote their use among athletes. Although Minor League Baseball prohibits use of smokeless products, Major League Baseball restricts but does not prohibit their use. San Francisco has adopted a policy, which becomes effective January 1, 2016, that would prohibit the use of smokeless tobacco and all other tobacco products at all city professional and amateur athletic venues. On September 2, 2015, Boston enacted a similar policy that goes into effect April 1, 2016. Smokeless tobacco use among professional athletes is concerning because youth may view them as role models.

“Tobacco use among youth athletes is of particular concern because most adult tobacco users first try tobacco before age 18,” said Brian King, Ph.D., deputy director for research translation in the CDC Office on Smoking and Health. “The younger people are when they start using tobacco, the more likely they are to become addicted and the more heavily addicted they can become.”

Tobacco-free policies that prohibit all tobacco use by players, coaches, referees, and fans on school campuses and at all public recreational facilities—including stadiums, parks, and school gymnasiums—might help make smokeless tobacco use less socially acceptable and reduce its use among student athletes.

“Creating 100% tobacco-free environments is one of the best ways we can set our kids up for a healthy future,” said U.S. Surgeon General Vivek H. Murthy, M.D., M.B.A. “It helps them see that being tobacco-free is the way to better health and a longer life.”

Continued implementation of proven interventions is also critical to reducing all forms of tobacco use among youth, including increasing tobacco prices, warning about the dangers of tobacco use, and increasing access to tobacco cessation resources.