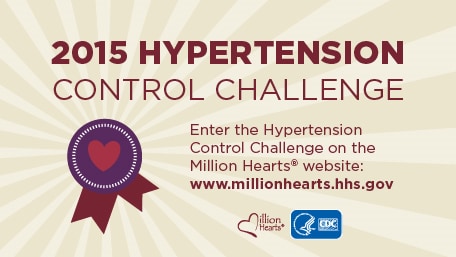 The U.S. Department of Health and Human Services today launched an annual challenge designed to identify and honor clinicians and health care teams that have helped their patients control high blood pressure and prevent heart attacks and strokes.

The Million Hearts Hypertension Control Challenge recognizes exemplary public and private practices and providers that achieve sustained hypertension control rates of 70 percent or above. The challenge was developed by the Centers for Disease Control and Prevention in support of Million Hearts, an HHS initiative aimed at preventing 1 million heart attacks and strokes by 2017.

“Many heart attacks and strokes — and needless early deaths — can be prevented if we get better control of high blood pressure,” said CDC Director Tom Frieden, M.D., M.P.H. “We applaud the many medical practices which have made hypertension control a daily priority with all of their patients. We look forward to recognizing their achievements and learning from top performing practices.”

Nearly one in three U.S. adults – or about 70 million people – has high blood pressure. Of that group, only about half has it under control. High blood pressure is a major risk factor for heart disease and stroke, two of the leading causes of death nationwide. In 2013, high blood pressure was a primary or contributing cause of death for more than 360,000 Americans – that is nearly 1,000 deaths each day.

Blood pressure management, a key strategy to prevent cardiovascular disease, is strongly emphasized by Million Hearts. Since 2012, Million Hearts has recognized 41 Champions that care for 12 million patients from small and large, urban and rural, and private, federal, and tribal health practices and systems. Past winners have used a variety of evidence-based strategies including hypertension treatment protocols, self-measured blood pressure monitoring, health information technology, and team-based care.

“A growing number of public and private practices and systems are using evidence-based strategies to detect, connect and control high blood pressure,” said Janet S. Wright, M.D., F.A.C.C., executive director of Million Hearts. “This challenge is a way to find and celebrate these high performers and help others replicate their success. By excelling in hypertension control, Champions are helping prevent events and improving heart health across the country.”

To enter the challenge, applicants must provide information about their practice, share verifiable high blood pressure control data, and describe how use of health information technology contributed to their success. Examples could include electronic health records, incentives for providers and patients, team-based care, and community involvement. The deadline to submit a nomination is before midnight on Oct. 31, 2015.

For more information about the Hypertension Challenge, previous winners or to access resources, visit http://millionhearts.hhs.gov.

About Million Hearts
Million Hearts is a national initiative to prevent 1 million heart attacks and strokes by 2017.  Million Hearts brings together communities, health systems, nonprofit organizations, federal agencies, and private-sector partners from across the country to fight heart disease and stroke.