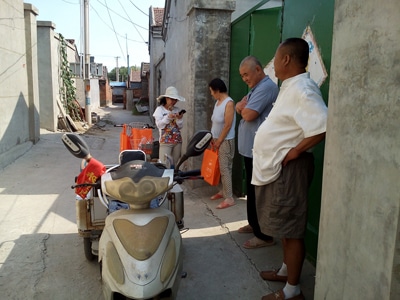 BEIJING, 18 August 2015 – Smoke-free environments are crucial for protecting the public from the harms of secondhand smoke, and there is very strong public support for making public places smoke-free in China. Strong laws are needed – and where they exist and are rigorously enforced, they work. These are the key findings from the results of the China City Adult Tobacco Survey, released in Beijing today.

“Secondhand smoke is toxic, and deadly. Yet this report shows that far too many people across cities in China – more than 4 in every 10 people in workplaces, for instance – are still being exposed.  There is no safe level of secondhand smoke, and the only way to protect against its harms is to make all indoor places 100% smoke-free,” said Dr Bernhard Schwartländer, World Health Organization (WHO) Representative in China.

“For years, many cities around China have been leading the charge on tobacco control in an effort to reduce the terrible impact of tobacco use on the health of their communities. We have seen this most recently in Beijing – where the country’s strongest tobacco control law to date came into effect on 1 June this year,” said Dr Schwartländer.

The survey asked people a range of questions about tobacco use and their awareness of, and attitudes toward, tobacco control policies.

“The survey results demonstrate very strong public support for smoke-free environments. These results are very encouraging. The data shows that smoke-free public places are not only good for people’s health, they are also very popular with the public. Smoke-free policies are win-win,” said Dr Liang Xiaofeng, Deputy Director of the Chinese Center for Disease Control and Prevention.

However, the results from the survey across cities highlight that the effectiveness of smoke-free policies depends on the strength of the laws themselves, and the rigour with which they are enforced. Stronger laws, when well enforced, deliver greater benefits. For example, rates of exposure to secondhand smoke were lower in cities with smoke-free regulations when compared to those without regulations, or in situations with weak and/or poorly implemented regulations.

“The U.S. data are crystal clear: smoke-free policies, raising the price of tobacco, and educating the public about the harmful use of tobacco and exposure to secondhand smoke saves lives,” said U.S. Centers for Disease Control and Prevention Director Tom Frieden, M.D., M.P.H.  “However to be most effective, policies must be implemented across the board and laws must be enforced.”

“Political commitment is key to the success of smoke-free policies, both in passing a strong policy and in making sure it is well implemented,” said Dr Ehsan Latif, Director of Tobacco Control at the International Union Against Tuberculosis and Lung Disease (The Union).

Other key findings from the survey include:

However, the survey results point to a range of areas where more progress is needed. For example:

The survey results make clear that full implementation of the policy measures contained in the WHO Framework Convention on Tobacco Control (WHO FCTC) is needed to protect China’s people from the deadly harms of tobacco use and secondhand smoke.

“The results of this survey contain important lessons for future tobacco control efforts in China, both for other cities, and for national lawmakers considering the draft national tobacco control regulation currently before China’s State Council. In particular – the results highlight the importance of having tough, comprehensive laws, and ensuring they are implemented well,” Dr Schwartländer concluded.

The China City Adult Tobacco Survey was conducted by the China CDC under the supervision of China’s National Health and Family Planning Commission and in collaboration with WHO. Funding for the survey was provided by China CDC; the 14 participating cities; the CDC Foundation with support from the Bloomberg Initiative to Reduce Tobacco Use with grants from the Bill & Melinda Gates Foundation and Bloomberg Philanthropies; the International Union Against Tuberculosis and Lung Disease; and Emory Global Health Institute.

*Note: the survey was conducted in Beijing before the Beijing Smoking Control Ordinance came into effect on 1 June, 2015.

About Chinese Center for Disease Control and Prevention (China CDC)

About the World Health Organization

WHO is the directing and coordinating authority for health within the United Nations system. It is responsible for providing leadership on global health matters, shaping the health research agenda, setting norms and standards, articulating evidence-based policy options, providing technical support to countries and monitoring and assessing health trends.

About Centers for Disease Control and Prevention and China

The Centers for Disease Control and Prevention (CDC)and the Chinese government have collaborated on public health priorities that affect China, the United States, and the global community for more than 30 years. CDC focuses its China-based work on HIV/AIDS, emerging and re-emerging infectious diseases, immunizations, workforce development, non-communicable diseases, and laboratory quality and safety.