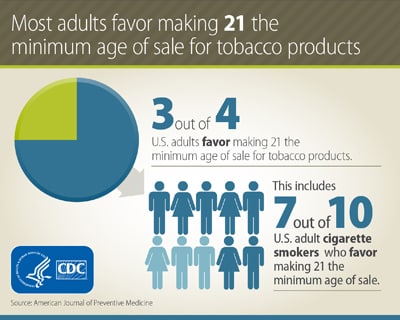 Three out of 4 American adults—including 7 in 10 cigarette smokers—favor raising the minimum age of sale for all tobacco products to 21, according to an article by CDC published in the American Journal of Preventive Medicine.  While an overwhelming majority of adults favored the policy overall, favorability is slightly higher among adults who never smoked and older adults. In contrast, 11 percent of adults strongly opposed making 21 the legal age of sale, while 14 percent somewhat opposed such measures.

In most states, the minimum age of sale for tobacco is 18; in Alabama, Alaska, New Jersey and Utah the minimum age of sale is 19. One state—Hawaii—currently prohibits sales of tobacco products to youth under the age of 21. Additionally, several cities and counties across the U.S. have adopted laws raising the minimum age to 21, starting with Needham, Massachusetts, in 2005. New York City; Hawaii County, Hawaii; Evanston, Illinois; Englewood, New Jersey; Columbia, Missouri; and several other communities in Massachusetts later followed suit.

“Raising the minimum age of sale to 21 could benefit the health of Americans in several ways,” said Brian King, Ph.D., acting Deputy Director for Research Translation in CDC’s Office on Smoking and Health. “It could delay the age of first experimenting with tobacco, reducing the likelihood of transitioning to regular use and increasing the likelihood that those who do become regular users can quit.”

Data for the study came from Styles, a nationally representative online survey of U.S. adults aged 18 and older. The findings are consistent with those from a national survey conducted in 2013and polls of voters in Colorado and Utah that found 57 percent and 67 percent, respectively, favor such policies. Favorability for the policies was found to increase with increasing age.

According to the 2014 Surgeon General Report, the tobacco industry aggressively markets and promotes its products and continues to recruit youth and young adults as new consumers. People who begin smoking at a young age are more likely to become addicted, to progress to daily use, to smoke more as they grow into adulthood, and to have trouble quitting.  A previous Surgeon General Report found about 96 percent of adult smokers first try cigarettes by the age of 21.

Age-of-sale restrictions have been shown to contribute to reductions in tobacco use and dependency among youth. In March 2015, an Institute of Medicine (IOM) report found that increasing the legal age of sale for tobacco will likely prevent or delay tobacco use initiation by adolescents and young adults. The IOM found that if all states were to raise the minimum age of sale for all tobacco products to 21, there would be a 12 percent decrease in cigarette smoking prevalence across the nation by 2100. This would translate into nearly 250,000 fewer premature deaths from cigarette smoking among people born between 2000 and 2019.