Hispanics' health in the United States 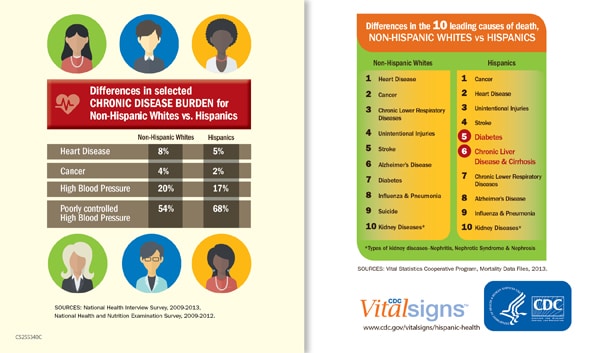 Health risk can vary by Hispanic subgroup. For example, nearly 66 percent more Puerto Ricans smoke than Mexicans. Health risk also varies partly by whether Hispanics were born in the U.S. or in another country. Hispanics are almost three times as likely to be uninsured as whites. Hispanics in the U.S. are on average nearly 15 years younger than whites, so taking steps now to prevent disease could mean longer, healthier lives for Hispanics.

“Four out of 10 Hispanics die of heart disease or cancer. By not smoking and staying physically active, such as walking briskly for 30 minutes a day, Hispanics can reduce their risk for these chronic diseases and others such as diabetes,” said CDC Director Tom Frieden, M.D., M.P.H. “Health professionals can help Hispanics protect their health by learning about their specific risk factors and addressing barriers to care.”

This Vital Signs report recommends that doctors, nurses and other health professionals:

Hispanic and other Spanish-speaking doctors and clinicians, as well as community health workers or promotores de salud, play a key role in helping to provide culturally and linguistically appropriate outreach to Hispanic patients.

The Vital Signs report used recent national census and health surveillance data to determine differences between Hispanics and whites, and among Hispanic subgroups. Hispanics are the largest racial and ethnic minority group in the U.S. Currently, nearly one in six people living in the U.S. (almost 57 million) is Hispanic, and this is projected to increase to nearly one in four (more than 85 million) by 2035.

Despite lower overall death rates, the study stressed that Hispanics may face challenges in getting the care needed to protect their health. Socio-demographic findings include:

The report also found different degrees of health risk among Hispanic by country of origin:

Through the Affordable Care Act, more people than ever qualify to get health care coverage that fits their needs and budget, including important preventive services. To learn more, visit HealthCare.gov, CuidadodeSalud.gov or call 1-800-318-2596 (TTY/TDD 1-855-889-4325). Translation services are available.

According to HHS data, the uninsured rate has dropped across all race and ethnicity categories since passage of the Affordable Care Act, with the greatest declines occurring among Hispanics where the uninsured rate dropped by 12.3 percentage points, resulting in 4.2 million Latino adults gaining coverage.

Vital Signs is a report that appears on the first Tuesday of the month as part of the CDC journal Morbidity and Mortality Weekly Report. The report provides the latest data and information on key health indicators. These are cancer prevention, obesity, tobacco use, motor vehicle passenger safety, prescription drug overdose, HIV/AIDS, alcohol use, health care-associated infections, cardiovascular health, teen pregnancy, and food safety.