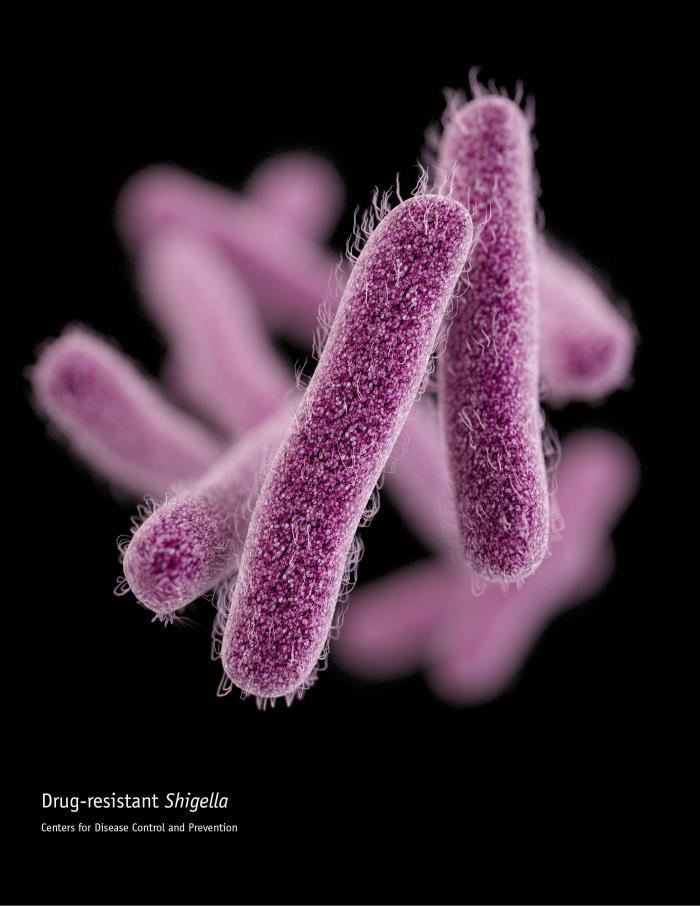 International travelers are bringing a multidrug-resistant intestinal illness to the United States and spreading it to others who have not traveled, according to a report released today by the Centers for Disease Control and Prevention (CDC). Shigella sonnei bacteria resistant to the antibiotic ciprofloxacin sickened 243 people in 32 states and Puerto Rico between May 2014 and February 2015. Research by the CDC found that the drug-resistant illness was being repeatedly introduced as ill travelers returned and was then infecting other people in a series of outbreaks around the country.

CDC and public health partners investigated several recent clusters of shigellosis in Massachusetts, California and Pennsylvania and found that nearly 90 percent of the cases tested were resistant to ciprofloxacin (Cipro), the first choice to treat shigellosis among adults in the United States. Shigellosis can spread very quickly in groups like children in childcare facilities, homeless people and gay and bisexual men, as occurred in these outbreaks.

“These outbreaks show a troubling trend in Shigella infections in the United States,” said CDC Director Tom Frieden, M.D., M.P.H. “Drug-resistant infections are harder to treat and because Shigella spreads so easily between people, the potential for more – and larger – outbreaks is a real concern.  We’re moving quickly to implement a national strategy to curb antibiotic resistance because we can’t take for granted that we’ll always have the drugs we need to fight common infections.”

In the United States, most Shigella is already resistant to the antibiotics ampicillin and trimethoprim/sulfamethoxazole. Globally, Shigella resistance to Cipro is increasing. Cipro is often prescribed to people who travel internationally, in case they develop diarrhea while out of the United States. More study is needed to determine what role, if any, the use of antibiotics during travel may have in increasing the risk of antibiotic-resistant diarrhea infections among returned travelers.

“The increase in drug-resistant Shigella makes it even more critical to prevent shigellosis from spreading,” said Anna Bowen, M.D., M.P.H., a medical officer in CDC’s Waterborne Diseases Prevention Branch and lead author of the study. “Washing your hands with soap and water is important for everyone. Also, international travelers can protect themselves by choosing hot foods and drinking only from sealed containers.”

CDC’s PulseNet lab network identified an increase in Shigella sonnei infections with an uncommon genetic fingerprint in December 2014. Further testing at CDC’s National Antimicrobial Resistance Monitoring System (NARMS) lab found that the bacteria were resistant to Cipro. PulseNet detected several large clusters: 45 cases in Massachusetts; 25 cases in California; and 18 cases in Pennsylvania. About half of the PulseNet cases with patient information were associated with international travel, mostly to the Dominican Republic and India. The San Francisco Department of Public Health reported another 95 cases (nine of them among those identified by PulseNet), with almost half occurring among the homeless or people living in single-room occupancy hotels.

Shigella causes an estimated 500,000 cases of diarrhea in the United States every year. It spreads easily and rapidly from person to person and through contaminated food and recreational water. It can cause watery or bloody diarrhea, abdominal pain, fever, and malaise. Although diarrhea caused by Shigella typically goes away without treatment, people with mild illnesses are often treated with antibiotics to stop the diarrhea faster. Until recently, Cipro resistance has occurred in just 2 percent of Shigella infections tested in the United States, but was found in 90 percent of samples tested in the recent clusters.

Because Cipro-resistant Shigella is spreading, CDC recommends doctors use lab tests to determine which antibiotics will effectively treat shigellosis. Doctors and patients should consider carefully whether an infection requires antibiotics at all.

To prevent the spread of shigellosis, CDC recommends that people wash their hands often with soap and water, especially after using the toilet and before preparing food or eating; keep children home from childcare and other group activities while they are sick with diarrhea; avoid preparing food for others while ill with diarrhea; and avoid swimming for a few weeks after recovering. Improving access to toilets and soap and water for washing hands may help prevent Shigella transmission among the homeless.

Travelers to developing countries can take additional precautions to avoid diarrhea and minimize infection with resistant bacteria. Choose safe foods and beverages, such as food that is steaming hot and drinks from sealed containers (download CDC’s app “Can I Eat This?” to help you make safer food and beverage choices when you travel).  Wash hands frequently, particularly before eating and after using the toilet. Take bismuth subsalicylate to prevent travelers’ diarrhea and treat it with over-the-counter drugs like bismuth subsalicylate or loperamide. Try to reserve antibiotics for severe cases of travelers’ diarrhea.

Health care providers should test stool samples from patients with symptoms consistent with shigellosis, re-test stool if patients do not improve after taking antibiotics, and test bacteria for antibiotic resistance.

Travelers can learn more about food and water precautions to prevent Shigella at: http://wwwnc.cdc.gov/travel/yellowbook/2014/chapter-2-the-pre-travel-consultation/food-and-water-precautions.