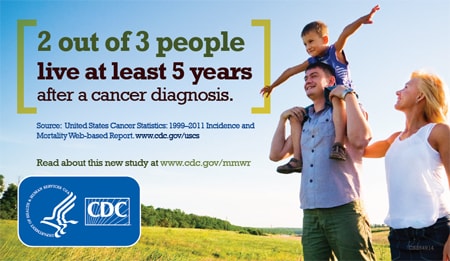 Two out of 3 people diagnosed with cancer survive five years or more, according to a CDC study published in today’s Morbidity and Mortality Weekly Report.

“We are pleased to include cancer survivor data in this report for the first time. We will review these data annually to track our progress,” said Jane Henley, epidemiologist in CDC’s Division of Cancer Prevention and Control and lead author of the study.

The cancer survivor estimates are from CDC’s National Program of Cancer Registries. CDC scientists reviewed the most recent data on cases of invasive cancers reported during 2011. With the exception of urinary bladder cancer, invasive cancer is defined as cancer that has spread to surrounding normal tissue from where it began.

The authors noted that disparities in cancer incidence still persist, with greater rates among men than women and the highest rates among blacks. Additionally, 5-year relative survival after any cancer diagnosis was lower for blacks (60 percent) than for whites (65 percent).

“These data are an important reminder that a key to surviving with cancer is making sure everyone has access to care from early diagnosis to treatment,” said Lisa Richardson, M.D., director of CDC’s Division of Cancer Prevention and Control.  “We know, for example, that early detection of colorectal cancer has had the largest impact on long-term survival rates.”

Through the Affordable Care Act, more Americans will qualify to get health care coverage that fits their needs and budget, including important preventive services, including screening for some cancers, that may be covered with no additional costs. Visit Healthcare.gov or call 1-800-318-2596 (TTY/TDD 1-855-889-4325) to learn more.

The full report, “Invasive Cancer Incidence and Survival – United States, 2011,” can be found at www.cdc.gov/mmwr. For more information about CDC’s efforts in cancer prevention and control, visit www.cdc.gov/cancer.