58 million nonsmokers in US are still exposed to secondhand smoke 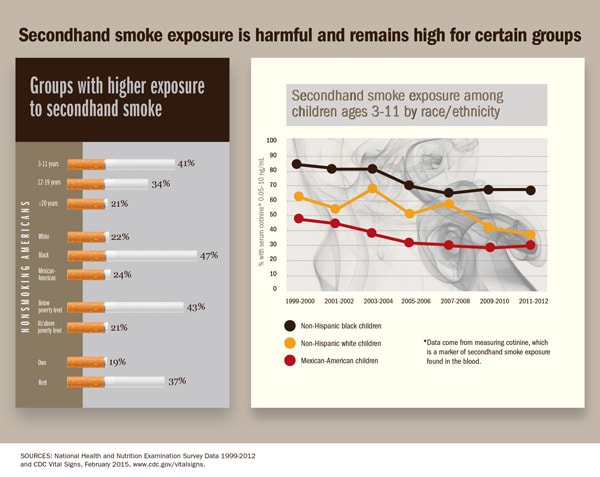 Although secondhand smoke (SHS) exposure in the United States dropped by half between 1999 to 2000 and 2011 to 2012, one in four nonsmokers — 58 million people — are still exposed to SHS, according to a new Vital Signs report from the Centers for Disease Control and Prevention.

Data from the National Health and Nutrition Examination Survey (NHANES) show that declines in exposure to SHS have been slower and exposure remains higher among children, blacks, those who live in poverty, and those who live in rental housing. The report finds two in every five children aged three to 11 years are still exposed to SHS. The study assessed exposure using cotinine, a marker of SHS found in the blood.

Additional key findings in the Vital Signs report include that:

The study used rental status as a way of identifying people who live in multiunit housing, which is an environment where the issue of SHS exposure is of particular concern.

“About 80 million Americans live in multiunit housing, where secondhand smoke can seep into smoke-free units and shared areas from units where smoking occurs,” said Brian King, Ph.D., acting deputy director for research translation in CDC’s Office on Smoking and Health. “The potential of exposure in subsidized housing is especially concerning because many of the residents — including children, the elderly, and people with disabilities — are particularly sensitive to the effects of secondhand smoke.”

The report credits the overall decline in SHS exposure to several factors. To date, 26 states, the District of Columbia, and almost 700 cities have passed comprehensive smoke-free laws prohibiting smoking in worksites, restaurants, and bars. These state and local laws currently cover almost half the US population. In addition, a growing number of households have adopted voluntary smoke-free home rules, increasing from 43 percent in 1992-1993 to 83 percent in 2010-2011. Also, cigarette smoking has declined significantly in the last two decades and smoking around nonsmokers has become much less socially acceptable.

The Surgeon General has concluded that there is no safe level of exposure to SHS, which contains over 7,000 chemicals including about 70 that can cause cancer. It is a known cause of Sudden Infant Death Syndrome, respiratory infections, ear infections, and asthma attacks in infants and children, as well as heart disease, stroke, and lung cancer in adult nonsmokers. Each year exposure to SHS causes more than 41,000 deaths from lung cancer and heart disease among non-smoking adults and 400 deaths from Sudden Infant Death Syndrome, as well as about $5.6 billion annually in lost productivity.

Vital Signs is a report that appears on the first Tuesday of the month as part of the CDC journal, Morbidity and Mortality Weekly Report. The report provides the latest data and information on key health indicators. These include cancer prevention, obesity, tobacco use, motor vehicle passenger safety, prescription drug overdose, HIV/AIDS, alcohol use, health care-associated infections, cardiovascular health, teen pregnancy, and food safety.