Alcohol poisoning kills six people in the US each day

Most deaths occur among middle-aged adults 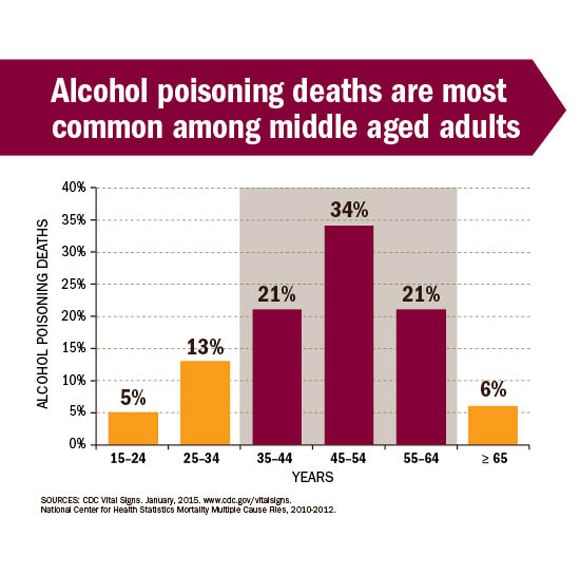 Alochol Poisoning Deaths: Common in all ages, most in middle age.
Entire Infographic

More than 2,200 people die from alcohol poisoning each year in the United States – an average of six deaths each day – according to a new Vital Signs report from the Centers for Disease Control and Prevention.

Alcohol poisoning deaths are caused by drinking a large amount of alcohol in a short period of time. This can result in very high levels of alcohol in the body, which can shutdown critical areas of the brain that control breathing, heart rate, and body temperature – resulting in death.

“Alcohol poisoning deaths are a heartbreaking reminder of the dangers of excessive alcohol use, which is a leading cause of preventable deaths in the U.S.” said CDC Principal Deputy Director Ileana Arias, Ph.D. “We need to implement effective programs and policies to prevent binge drinking and the many health and social harms that are related to it, including deaths from alcohol poisoning.”

CDC scientists analyzed deaths from alcohol poisoning among people aged 15 years and older, using multiple cause-of-death data from the National Vital Statistics System for 2010-2012. Alcohol dependence (alcoholism) was identified as a contributing factor in 30 percent of these deaths, and other drugs were noted to have been a factor in about 3 percent of the deaths. While this study reveals that alcohol poisoning deaths are a bigger problem than previously thought, it is still likely to be an underestimate.

“This study shows that alcohol poisoning deaths are not just a problem among young people,” said CDC Alcohol Program Lead and report coauthor Robert Brewer, M.D., M.S.P.H. “It also emphasizes the importance of taking a comprehensive approach to reducing binge drinking that includes evidence-based community strategies, screening and counseling in healthcare settings, and high-quality substance abuse treatment for those who need it.”

Vital Signs is a CDC report that appears on the first Tuesday of the month as part of the CDC journal Morbidity and Mortality Weekly Report, or MMWR. The report provides the latest data and information on key health indicators. These are cancer prevention, obesity, tobacco use, motor vehicle passenger safety, prescription drug overdose, HIV/AIDS, alcohol use, healthcare-associated infections, cardiovascular health, teen pregnancy, and food safety.