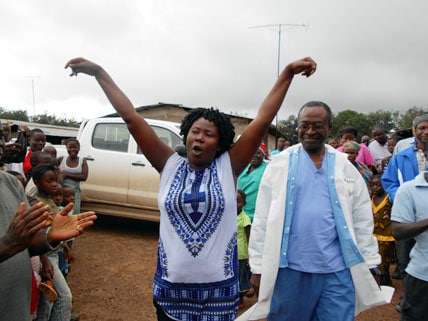 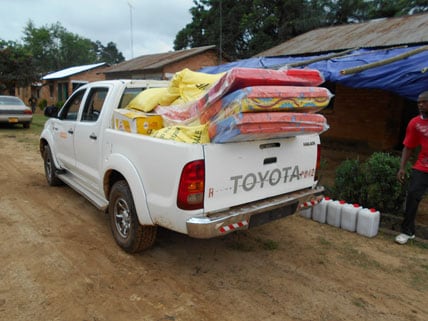 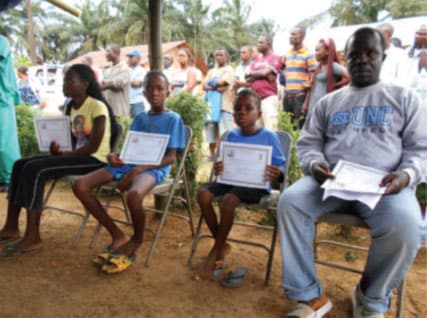 The case fatality rate in West Africa’s ongoing Ebola epidemic – estimates range from 60 percent to 70 percent of those hospitalized – hides a hopeful statistic:  the fact that many Ebola patients survive. There now are thousands of Ebola survivors.

In this epidemic as in past Ebola outbreaks, survivors often face stigma, income loss, and both grief and survivor guilt over the loss of family and friends. Many if not all of their possessions have been destroyed to prevent disease transmission. In some cases, families have been reluctant to accept orphaned children.

Two reports in the December 12 early release issue of CDC’s Morbidity and Mortality Weekly Report (MMWR) detail programs in Liberia and Sierra Leone to help Ebola survivors reintegrate with their communities and resume their lives. As survivors are thought to have some protective immunity to the strain of Ebola that sickened them, many survivors now work as caregivers for other Ebola patients.

“Nothing says more about the resilience of the human spirit than Ebola survivors who become role models for their communities,” said CDC Director Tom Frieden, M.D., M.P.H. “They show others that Ebola can be defeated and provide care, support, and inspiration for others stricken by this terrible disease.”

According to an August 2014 survey by the Sierra Leone Ministry of Health and Sanitation, CDC, and other partners, 96 percent of the general population reported at least some discriminatory attitude toward people with Ebola. This stigma discourages people from seeking Ebola testing and treatment and increases the already difficult task of contact tracing. It extends to Ebola survivors, who may be shunned by their communities.

CDC staff joined a consortium of members of the Sierra Leonean government, nongovernment organizations, and donor agencies to assess the needs of Ebola survivors. The group performed a study of three districts heavily affected by Ebola, convened a National Survivor Conference, conducted focus groups with survivors, and observed counseling sessions at a survivor wellness center.

Survivors showed great interest in contributing to the Ebola response through activities such as sharing their stories directly through radio and other broadcast media. They also expressed interest in participating in direct Ebola care and treatment support in and providing spiritual support to other Ebola patients to give them hope. Survivors said that supporting themselves with this work would help restore their own dignity.

The consortium now is coordinating financial and psychosocial support for survivors. This support includes a “survivor packet” that includes cash, bedding, clothing, and other essentials of daily living. Counselors will accompany survivors when returning to their home villages to facilitate reintegration, and trained counselors are speaking with local traditional authorities and other community members about the importance of survivor acceptance. Survivor support centers are being established at the district level, and plans are underway to integrate survivors into Ebola response activities.

In August 2014, the Firestone District of Liberia, where Firestone Liberia Inc. provides health care to 80,000 residents, enrolled their first patient in a model Ebola survivor reintegration program. The program was designed to offer survivors psychosocial support as well as to lessen stigma, provide hope, and motivate community members to report suspect Ebola cases and to seek care early in the course of disease.

“Well-coordinated survivor reintegration programs help stop the spread of Ebola and heal communities,” Dr. Frieden said. “Businesses can follow Firestone’s excellent example and contribute to the effort to get to zero in this Ebola epidemic.”

From August through October, 2014, 22 patients with laboratory-confirmed Ebola recovered from their illness at the Firestone Ebola Treatment Unit (ETU). During the three days between their first negative Ebola test and a second test confirming that they were Ebola free, survivors were transferred to a recovery room in the ETU and given education and counseling.

Each survivor received a “solidarity kit” including a new mattress, bedding, towels, an insecticide-treated mosquito net, soaps and toiletries, a 110-pound bag of rice, three gallons of cooking oil, toys (for children), clothing, and cash for food and personal necessities. After the reintegration ceremony, the physician-led Firestone medical team visited all survivors at home every week for three months, both for a clinical checkup and to provide social and psychological support.

No major reintegration problems have occurred to date. Reintegration ceremonies continue to be well-attended by dozens of community members, and the events have been celebratory rather than confrontational events.

For a podcast on this topic please visit: http://tools.cdc.gov/podcasts/player.asp?f=8634900 .