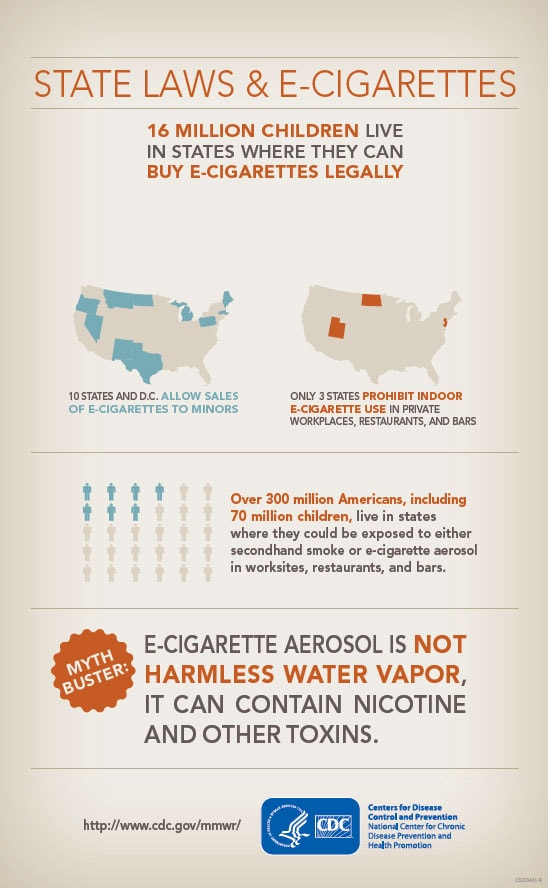 Forty states have enacted laws prohibiting the sale of electronic nicotine delivery systems (ENDS), including e-cigarettes, to minors, but 10 states and the District of Columbia still permit such sales, according to a report published by the Centers for Disease Control and Prevention in today’s Morbidity and Mortality Weekly Report (MMWR).

“We know e-cigarettes are not safe for youth,” said Tim McAfee, M.D., M.P.H., director of CDC’s Office on Smoking and Health. “While ENDS may have the potential to benefit established adult smokers if used as a complete substitute for all smoked tobacco products, ENDS should not be used by youth and adult non-tobacco users because of the harmful effects of nicotine and other risk exposures, as well as the risk for progression to other forms of tobacco use.”

While 26 states and the District of Columbia have comprehensive smoke-free laws that prevent smoking in restaurants, worksites, and bars, only three of those states also prohibit ENDS use indoors: New Jersey, North Dakota, and Utah. Therefore more than 300 million Americans, including 70 million children, live in states in which non-users of these products can be involuntarily exposed to either secondhand smoke from cigarettes and other smoked tobacco products or ENDS aerosol. Since 2012, no states have enacted comprehensive smoke-free laws or laws prohibiting public indoor ENDS use. These laws could help prevent renormalization of tobacco use because youth are particularly susceptible to visual cues to use tobacco.

“ENDS aerosol is not harmless water vapor; it can contain nicotine and other toxins,” said Brian King, Ph.D., senior scientific advisor in CDC’s Office on Smoking and Health. “Exposure to nicotine can harm adolescent brain development and can be toxic to fetuses. The standard for protecting the health of children and bystanders should be clean air, free of toxic secondhand smoke as well as ENDS aerosol.”

ENDS minor sales laws have increased in recent years; of the 40 states with minor sales restrictions, 12 laws became effective in 2013 and 16 thus far in 2014. This surge may be partly attributable to efforts by the tobacco industry, which has actively advocated for state laws prohibiting sales to minors. This is of concern because the 2012 Surgeon General’s Report found that industry-supported “youth access bills” have contained provisions that undermined efforts to prevent youth from starting to use tobacco products, such as local preemption of stricter policies and weak enforcement requirements.

The Surgeon General has concluded that nicotine exposure during adolescence may have lasting adverse consequences for brain development, and that nicotine adversely affects maternal and fetal health during pregnancy, contributing to multiple outcomes such as preterm delivery and stillbirth.

Although e-cigarettes have been marketed as smoking cessation aids, there is currently no conclusive scientific evidence that e-cigarettes promote successful long-term quitting. However, there are proven adult cessation strategies and treatments, including counseling and FDA-approved cessation medications.

The 2012 Surgeon General’s Report found that about 90 percent of all smokers first experiment as teens; and that about three of every four teen smokers become adult smokers– even if they plan to quit in a few years. To learn more about quitting and preventing children from using tobacco, visit www.BeTobaccoFree.gov.