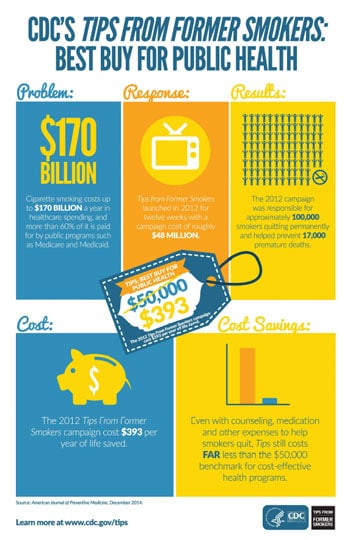 The 2012 Tips From Former Smokers campaign spent only $480 per smoker who quit and $393 per year of life saved, according to an analysis by the Centers for Disease Control and Prevention. The results of the study were published today in the American Journal of Preventive Medicine.

A commonly accepted threshold for cost-effectiveness of a public health intervention is $50,000 per year of life saved. When related to smoking, that cost-effectiveness figure may also include costs of counseling, medications and other expenses contributing to successful cessation. Even when those costs are added to the cost of the Tips campaign, the total is still 15 times less than the $50,000 benchmark for cost-effectiveness.

“There is no question the Tips campaign is a ‘best buy’ for public health – it saves lives and saves money,” said CDC Director Tom Frieden, M.D., M.P.H. “Smoking-related disease costs this nation more than $289 billion a year. The Tips campaign is one of the most cost-effective of all health interventions. This study shows how much the Tips campaign accomplished by being on the air for just 12 weeks. We would expect the benefits to be even greater if Tips was on the air all year.”

Tips From Former Smokers is the first federally funded national mass media anti-smoking campaign. It launched in 2012 with a campaign cost of roughly $48 million. The campaign was responsible for an estimated 100,000 smokers quitting permanently. The study also calculated the 2012 campaign will save about 179,000 healthy life-years at a cost of $268 per year of healthy life gained, and contributed to averting about 17,000 premature deaths at a cost of about $2,200 per premature death averted.

Hard-hitting mass media campaigns can effectively reduce cigarette use. The 2014 Surgeon General’s Report called for high-impact national media campaigns to air at high frequency and exposure levels year round for a decade or more, as part of a comprehensive strategy to bring down smoking rates to under 10 percent.

“This is further proof the Tips campaign is a smart, effective and efficient use of taxpayer dollars,” said Tim McAfee, M.D., M.P.H., Director of  CDC’s Office on Smoking and Health, and one of the authors of the study.  “Our mission is to protect the public health, and the 2012 Tips ads did this by motivating 1.6 million smokers to make a quit attempt. In addition, our responsibility is to spend public dollars as wisely and efficiently as possible. This study shows Tips cleared this bar with ample room to spare.”

Cigarette smoking is the leading preventable cause of disease and death in the United States, killing about 480,000 Americans each year. For every person who dies this year, there are over 30 Americans who continue to live with a smoking-related disease. Additional research from the CDC, also released today in the American Journal of Preventive Medicine, shows that annual health care spending in the U.S. attributable to cigarette smoking totals as much as $170 billion a year, and 60 percent of that cost is paid for by Americans through public programs such as Medicare or Medicaid.

Surveys show about 70 percent of all smokers want to quit, and research shows quitting completely at any age has major and immediate health benefits. Smokers can get free help quitting by calling 1-800-QUIT-NOW. There they can get free counseling and information about the seven smoking cessation medications approved by the U.S. Food and Drug Administration. Free help is also available at the website www.smokefree.gov.

For more information on the Tips From Former Smokers campaign, including profiles of the former smokers, other campaign resources and links to the ads, visit www.cdc.gov/tips.