Most people who drink excessively are not alcohol dependent 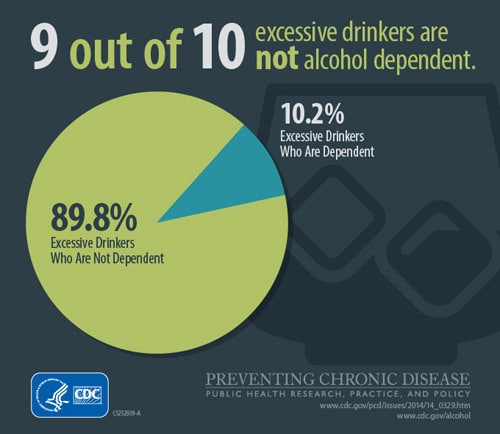 Nine in 10 adults who drink too much alcohol are not alcoholics or alcohol dependent, according to a new study released by the Centers for Disease Control and Prevention in collaboration with the Substance Abuse and Mental Health Services Administration (SAMHSA). The study appears today in the CDC journal Preventing Chronic Disease.

Alcohol dependence is a chronic medical condition that typically includes a current or past history of excessive drinking, a strong craving for alcohol, continued use despite repeated problems with drinking, and an inability to control alcohol consumption.

“This study shows that, contrary to popular opinion, most people who drink too much are not alcohol dependent or alcoholics,” said Robert Brewer, M.D., M.S.P.H., Alcohol Program Lead at CDC and one of the report’s authors. “It also emphasizes the importance of taking a comprehensive approach to reducing excessive drinking that includes evidence-based community strategies, screening and counseling in healthcare settings, and high-quality substance abuse treatment for those who need it.”

Excessive alcohol use is responsible for 88,000 deaths in the U.S. each year (including about 3,700 deaths from alcohol dependence), and cost the U.S. $223.5 billion in 2006. These deaths were due to health effects from drinking too much over time, such as breast cancer, liver disease, and heart disease; and health effects from drinking too much in a short period of time, such as violence, alcohol poisoning, and motor vehicle crashes.

Excessive drinkers who are dependent often need specialized or more intensive treatment to change their behavior. People who drink too much, but are not dependent, can still be encouraged to drink less through state and local interventions that increase the price and limit the availability of alcohol. In addition those who are not dependent may be candidates for other clinical interventions, including screening and counseling offered by doctors and other health professionals.

CDC and SAMHSA scientists analyzed data on 138,100 U.S. adults aged 18 years and older from all 50 states and D.C. who participated in the National Survey on Drug Use and Health (NSDUH) in 2009, 2010, or 2011. The survey includes a wide range of questions on substance use, including current drinking, binge drinking, average alcohol consumption, and symptoms of alcohol dependence.

The Community Preventive Services Task Force recommends several evidence-based strategies to reduce excessive drinking, including increasing alcohol taxes, regulating alcohol outlet density, and holding alcohol retailers liable for harms resulting from illegal sales to minors or intoxicated patrons. The U.S. Preventive Services Task Force recommends screening and counseling for excessive drinking for all adult patients. This service is covered by most insurance plans, and can also be delivered by computer or telephone.

For more information about excessive drinking, including binge drinking, and how to prevent this dangerous behavior, visit the CDC’s Alcohol and Public Health website at http://www.cdc.gov/alcohol/index.htm.  Members of the public who are concerned about their own or someone else’s drinking can call SAMHSA’s National Helpline at1-800-662-HELP to receive assistance from the Treatment Referral Routing Service.