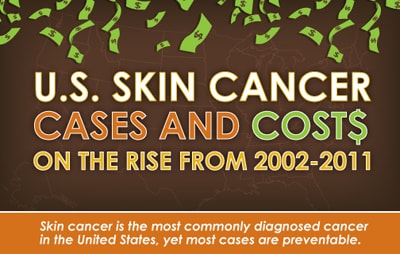 U.S. Skin Cancer Cases and Costs on the Rise from 2002-2011
Entire Infographicpdf icon

The costs associated with skin cancer increased five times as fast as treatments for other cancers between 2002 and 2011, according to a CDC study published online today in the American Journal of Preventive Medicine.

Skin cancer, the most commonly diagnosed cancer in the United States, is a major and growing public health problem. The number of skin cancer cases has been increasing, but little was known prior to this study about the costs of treating skin cancer.

“The findings raise the alarm that not only is skin cancer a growing problem in the United States, but the costs for treating it are skyrocketing relative to other cancers, said the lead author of the report, Gery Guy, Ph.D., of the CDC’s Division of Cancer Prevention and Control. “This also underscores the importance of skin cancer prevention efforts.”

The report studied skin cancer data on adults between 2002 and 2011 using the Medical Expenditure Panel Survey. The researchers created two 5-year periods of data from 2002-2006 and 2007-2011 to allow for a comparison over time and to improve the precision of the estimates. The average annual number of adults treated for skin cancer increased from 3.4 million in 2002-2006 to 4.9 million in 2007-2011.

Nearly 5 million people are treated for skin cancer every year in the United States. Most cases of melanoma, the deadliest kind of skin cancer, are caused by exposure to ultraviolet (UV) light.

People should take steps to protect themselves from UV exposure that could lead to skin cancer by protecting their skin from the sun and avoiding indoor tanning. CDC recommends these easy options:

The Surgeon General’s Call to Action to Prevent Skin Cancer calls on all sectors to do more to reduce skin cancer.  Examples include communities creating more opportunities for sun protection in outdoor settings, health providers counseling patients on the importance of using sunscreen, and colleges discouraging indoor tanning.