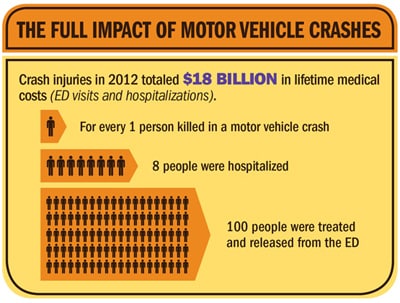 More than 2.5 million people went to the emergency department (ED) – and nearly 200,000 of them were hospitalized – because of motor vehicle crash injuries in 2012, according to the latest Vital Signs report by the Centers for Disease Control and Prevention.

“In 2012, nearly 7,000 people went to the emergency department every day due to car crash injuries,” said CDC Principal Deputy Director Ileana Arias, Ph.D. “Motor vehicle crash injuries occur all too frequently and have health and economic costs for individuals, the health care system, and society.  We need to do more to keep people safe and reduce crash injuries and medical costs.”

For this Vital Signs report, CDC analyzed ED visits due to crash injuries in 2012 using the National Electronic Injury Surveillance System-All Injury Program and the Nationwide Inpatient Sample. The number and rate of all crash injury ED visits, treated and released visits, and hospitalized visits were estimated, as were the associated number of hospitalized days and lifetime medical costs.

“Motor vehicle crashes and related injuries are preventable,” said Gwen Bergen, PhD, MPH, MS, behavioral scientist in the Division of Unintentional Injury Prevention of the National Center for Injury Prevention and Control. “Although much has been done to help keep people safe on the road, no state has fully implemented all the interventions proven to increase the use of car seats, booster seats, and seat belts; reduce drinking and driving; and improve teen driver safety.”

Released in conjunction with this month’s Vital Signs is CDC’s new interactive calculator, called the Motor Vehicle PICCS (Prioritizing Interventions and Cost Calculator for States).  This tool will help state decision makers prioritize and select from a suite of 12 effective motor vehicle injury prevention interventions. It is designed to calculate the expected number of injuries prevented and lives saved at the state level, as well as the costs of implementation, while taking into account the state’s available resources. A fact sheet for each intervention and a final report with methodologies and cost-effectiveness analyses are included. The Motor Vehicle PICCS is available online at: http://www.cdc.gov/motorvehiclesafety/calculator.

CDC’s Injury Center works to protect the safety of everyone, every day. For more information about motor vehicle safety, please visit www.cdc.gov/motorvehiclesafety.

Vital Signs is a CDC report that appears on the first Tuesday of the month as part of the CDC journal Morbidity and Mortality Weekly Report, or MMWR. The report provides the latest data and information on key health indicators. These are cancer prevention, obesity, tobacco use, motor vehicle passenger safety, prescription drug overdose, HIV/AIDS, alcohol use, health care-associated infections, cardiovascular health, teen pregnancy, food safety and viral hepatitis.