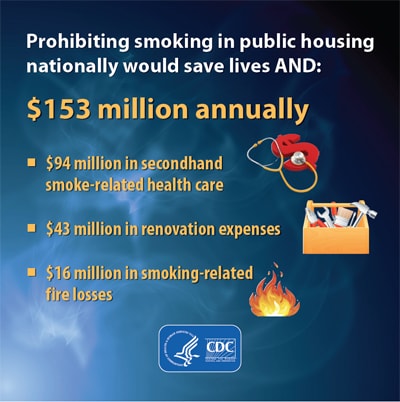 Prohibiting smoking in all government subsidized housing in the United States, including public housing, would save an estimated $497 million per year in health care and housing-related costs, according to a CDC study published in Preventing Chronic Disease.

The total cost saved comprises of about $310 million in secondhand smoke-related health care, $134 million in renovation expenses, and $53 million in smoking-attributable fire losses. The analysis found that prohibiting smoking in public housing either owned or operated by a government housing authority would yield cost savings of $153 million annually.

HUD is a member of the National Prevention Council and is committed to advancing the National Prevention Strategy’s priority of Tobacco-Free Living. Since January 2012, the number of smoke free public housing agencies has more than doubled, and HUD continues to educate housing operators and residents about the health and economic benefits of prohibiting smoking, and encouraging smoke-free policies. HUD will also continue to provide practical guidance on the adoption and implementation of smoke-free policies. Providing resources and information on smoking cessation and preventing the initiation of smoking will help increase the number of subsidized housing residents protected by these policies.

The Surgeon General has concluded that there is no safe level of exposure to secondhand smoke and that only 100 percent smoke-free policies fully protect people from involuntary exposure. Secondhand smoke kills more than 40,000 Americans each year and causes health problems in adults such as cancer and heart disease. Children exposed to secondhand smoke have more frequent and intense asthma attacks, more respiratory infections and higher risk of sudden infant death syndrome.

For smoke-free housing toolkits and other information for owners and managers of federally assisted public and multi-family housing, visit http://portal.hud.gov/hudportal/HUD?src=/smokefreetoolkits1.