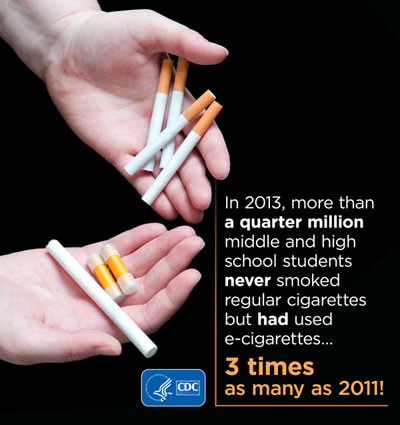 More than a quarter of a million youth who had never smoked a cigarette used electronic cigarettes in 2013, according to a CDC study published in the journal Nicotine and Tobacco Research.  This number reflects a three-fold increase, from about 79,000 in 2011, to more than 263,000 in 2013.

There is evidence that nicotine’s adverse effects on adolescent brain development could result in lasting deficits in cognitive function.  Nicotine is highly addictive.  About three out of every four teen smokers become adult smokers, even if they intend to quit in a few years.
The analysis also looked at the association between tobacco advertisements and smoking intentions among middle and high school students.  Students were asked about whether they had seen tobacco ads on the internet, in magazines and newspapers, in retail stores, and in television programs and movies.  Consistent with previous studies, this study found that youth who reported exposure to tobacco ads had higher rates of intention to smoke than those who weren’t exposed to such ads.

The researchers also found the greater the number of advertising sources to which young people were exposed, the greater their rate of intention to smoke cigarettes.  Thirteen percent of students who said they had no exposures to such ads had intentions to smoke, compared to 20.4 percent among those who reported exposures from one to two ad sources and 25.6 percent among those who reported exposures from three to four of the sources.

More than 50 years since the landmark Surgeon General’s Report linking cigarette smoking to lung cancer, smoking remains the leading cause of preventable death and disease in the United States.  Smoking kills nearly half a million Americans every year.  More than 16 million Americans live with a smoking-related disease.  Smoking-related diseases cost Americans $132 billion a year in direct health care expenses, much of which comes in taxpayer-supported payments.  Each day, more than 3,200 American youth smoke their first cigarette.  The Surgeon General has concluded that unless the smoking rate is rapidly reduced, 5.6 million American children alive today – about one in every 13—will die prematurely from a smoking-related disease.

*EDITOR’S NOTE:
Researchers used established methods to identify youth who are at risk of future cigarette smoking. In this approach, only youth who have a firm intention to not smoke, that is they reported they would “definitely not” smoke in the next year and reported they would “definitely not” smoke if offered a cigarette by a friend are classified as not having smoking intentions. All others were classified as having smoking intentions. Previous research has demonstrated that even youth who believe they probably will not smoke in the next year, are at heightened risk of initiating smoking in the future. For this reason, they are traditionally included by researchers as having smoking intentions and were in this study as well.

In addition to the primary analysis, the authors performed multiple analyses using alternative classifications of smoking intentions among youth. Even when using a more restrictive classification, which only includes those youth with strongest smoking intentions (responses of “definitely” or “probably” will smoke), the results continue to show that never smoking youth who smoked e-cigarettes are nearly two times more likely to have intentions to smoke conventional cigarettes than those who had never used e-cigarettes.