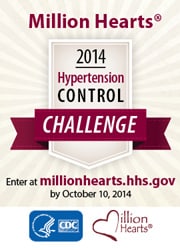 The U.S. Department of Health and Human Services today launched a challenge designed to identify practices, clinicians and health systems that have successfully worked with patients to reduce high blood pressure and improve heart health.

Now in its third year, the Million Hearts Hypertension Control Challenge was developed by the Centers for Disease Control and Prevention, in support of Million Hearts, to recognize exemplary practices and providers in blood pressure management. This includes working with patients to achieve hypertension control rates of 70 percent or above and motivating practices and health systems to intensify their efforts.

“Controlling blood pressure prevents heart attacks and strokes and saves lives,” said CDC Director Tom Frieden, M.D., M.P.H. “Providers and health care systems that focus on improving hypertension control with their patients get great results. It’s important that we recognize those providers and patients that been successful and learn from them. We are delighted to spotlight these success stories and best practices and encourage others to follow their lead.”

Nearly 1 in 3 American adults has hypertension, also known as high blood pressure.  Only half of those have it under control and are at risk of having heart disease or stroke, two of the leading causes of death and disability for Americans.  As a result, Million Hearts – a joint initiative of CDC and the Centers for Medicare & Medicaid Services, along with other federal agencies and private sector partners – has prioritized improving blood pressure control nationwide.

To enter the challenge, entrants must provide information about their practice, share verifiable high blood pressure control data, and describe how use of health information technology such as electronic health records, incentives for providers and patients, team-based care and community involvement contributed to success. The deadline to submit a nomination is before midnight on Oct 10, 2014.

In the 2013 challenge, nine public and private practices and health systems across the country were recognized as Hypertension Control Champions for success in achieving high blood pressure control rates higher than the Million Hearts goal of 70 percent.  Together, they cared for more than 8.3 million adult patients, and represented small and large, urban and rural, and private and federal health practices and systems.

“Million Hearts is excited to host this challenge and looks forward to showcasing practices and providers that are finding ways to prevent heart attacks and strokes by bringing high blood pressure under control,” said Janet S. Wright, MD, FACC, Executive Director of Million Hearts. “By working together, focused on a common goal, we can lead the way to a heart-healthy America and ultimately help prevent the more than 1,000 deaths a day in the United States caused by high blood pressure.”

For more information about the Hypertension Challenge, previous winners or to access resources, visit http://millionhearts.hhs.gov.

About Million Hearts
Million Hearts is a national initiative to prevent 1 million heart attacks and strokes by 2017.  Million Hearts brings together communities, health systems, nonprofit organizations, federal agencies, and private-sector partners from across the country to fight heart disease and stroke.