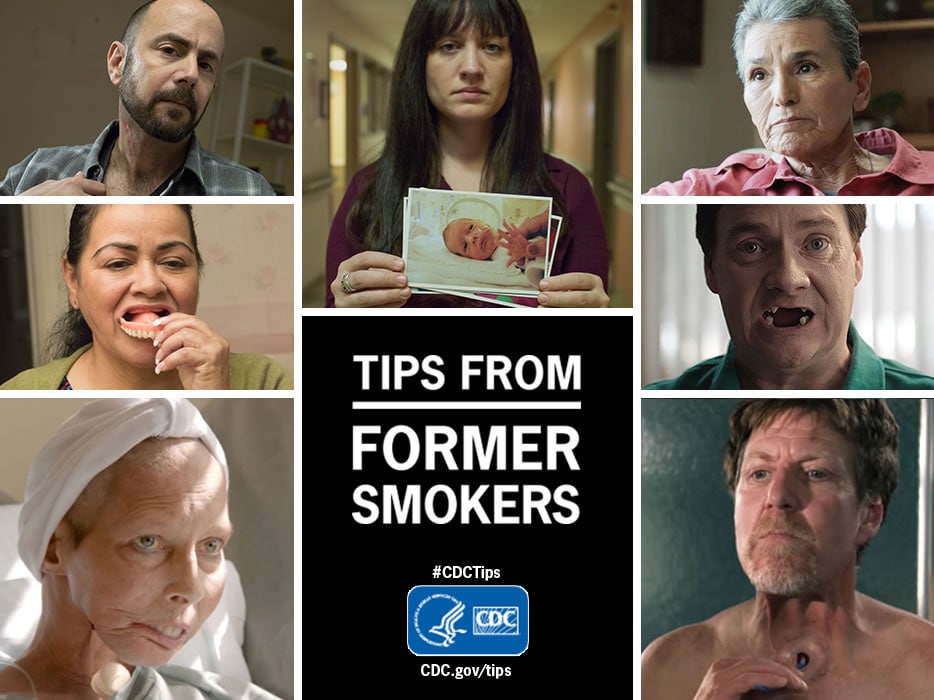 The Centers for Disease Control and Prevention is launching hard-hitting ads for its 2014 “Tips From Former Smokers” campaign.  Beginning July 7, these ads will run nationwide for nine weeks on television, radio, and billboards, online, and in theaters, magazines, and newspapers.  The launch of these ads comes as CDC is also releasing new data on how many U.S. adults use some form of tobacco.

The Tips national tobacco education campaign has helped hundreds of thousands of smokers quit since it began in 2012.  This year Tips returns with new ad participants living with the devastating effects of smoking-related diseases.

“These new ads are powerful. They highlight illnesses and suffering caused by smoking that people don’t commonly associate with cigarette use,” said CDC Director Tom Frieden, M.D., M.P.H.  “Smokers have told us these ads help them quit by showing what it’s like to live every day with disability and disfigurement from smoking.”

Participants include Amanda, a 30-year-old who smoked during pregnancy and whose baby was born two months early and then spent weeks in an incubator.  According to the 2014 Surgeon General’s report on the health consequences of smoking, at least 1 in 10 women smoke during the last three months of pregnancy, making this powerful new Tips ad an important way to educate and connect women with smoking cessation services.

“Amanda’s powerful story brings to life some of the health problems smoking during pregnancy can cause for unborn children,” said Tim McAfee, M.D., M.P.H, director of CDC’s Office on Smoking and Health.  “The best time to quit smoking is before you get pregnant, but quitting any time during pregnancy can help your baby get a better start on life.”

Another new ad features Terrie, who – before dying of cancer last September at age 53 – pled to any smoker willing to listen, “Keep trying until you succeed – I don’t want anybody to have to go through what I’m going through.”

Two Spanish-language ads will run on national Spanish media channels.  One features Rose, who has lung cancer, while a second features Felicita and Brett who both lost their teeth to smoking.

Hard-hitting media campaigns like Tips have been shown to reduce tobacco use.  More than 1 in 5 U.S. adults uses some form of tobacco regularly, according to CDC’s National Adult Tobacco Survey.  The survey shows that while the prevalence of cigarette smoking among adults every day or some days was 18.0 percent during 2012-2013, when factoring in use of all combustible products— such as cigars, little cigars, cigarillos, pipes and hookahs— prevalence increases to 19.2 percent.  Including non-combustible tobacco products such as e-cigarettes and smokeless tobacco increases prevalence to 21.3 percent.  When the survey factors in adults who say they use tobacco products rarely—that is, occasionally or intermittently—prevalence rises to 22.9 percent for combustible tobacco products and 25.2 percent for tobacco products overall.

Consistent with other national surveys of cigarette smoking, these new data show that prevalence of any tobacco use was greater among men, among people less educated and with lower household incomes, and among lesbian, gay, bi-sexual or transgender adults.

The new ads encourage smokers to call 1-800-QUIT-NOW, a toll-free number to access quit support across the country, or to visit www.cdc.gov/tips to view the personal stories from the campaign.  The website also includes detailed assistance developed by the National Cancer Institute to support smokers trying to quit.  Because of the Affordable Care Act, most health plans must now cover with no additional costs (e.g., copays or deductibles) tobacco use screening for all adults and cessation interventions for tobacco users, including tailored counseling for pregnant women who smoke.

Existing Tips ads that ran earlier this year had immediate and strong impact.  During their nine-week run, the ads generated more than 100,000 additional calls to 800-QUIT-NOW.  On average, weekly quitline calls were up 80 percent while the ads were on the air compared to the week before they began running.  Preliminary estimates show there were nearly 650,000 unique visitors to the Tips website during those nine weeks.

Besides the human cost, smoking takes a devastating toll on our nation’s economy—costing more than $289 billion a year (including at least $133 billion in direct medical care for adults and more than $156 billion in lost productivity).  The Tips campaign serves as an important counter to the more than $8.3 billion spent annually by the tobacco industry to make cigarettes more attractive and more affordable — particularly to youth and young adults.  For more information on the campaign, including profiles of the former smokers, other campaign resources and links to the ads, visit www.cdc.gov/tips.