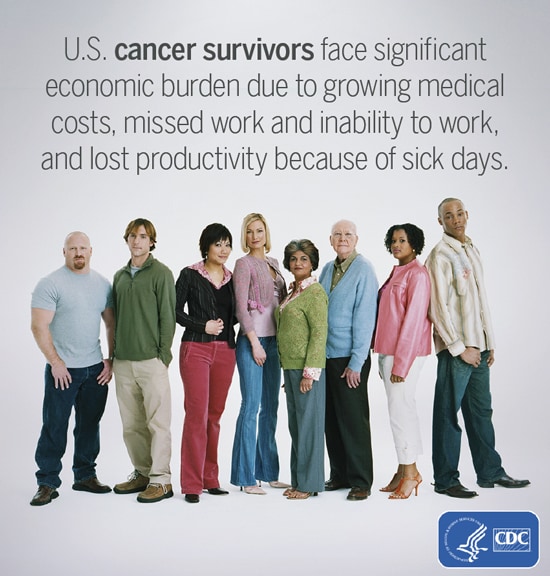 U.S. cancer survivors face significant economic burdens due to growing medical costs, missed work, and reduced productivity, according to a study by the Centers for Disease Control and Prevention in today’s Morbidity and Mortality Weekly Report.

“Cancer survivors face physical, emotional, psychosocial, employment and financial challenges as a result of their cancer diagnosis and treatment,” said Donatus U. Ekwueme, PhD, a senior health economist at CDC’s Division of Cancer Prevention and Control. “With the number of cancer survivors expected to increase by more than 30 percent in the next decade – to 18 million Americans — medical and public health professionals must be diligent in their efforts to help reduce the burden of cancer on survivors and their families.”

Researchers analyzed data from the Agency for Healthcare Research and Quality’s 2008-2011 Medical Expenditure Panel Survey to estimate annual medical costs and productivity losses among male and female cancer survivors, aged 18 years and older, and among persons without a cancer diagnosis. Lost productivity was estimated by reviewing employment disability (being unable to work because of illness or injury), health-related missed work days, and days spent in bed due to ill health.

The report also found that about 10 percent of survivors aged 65 years and younger were uninsured and likely to have a larger financial burden compared to survivors with some source of payment for medical services. Through the Affordable Care Act, millions of Americans, including cancer survivors, have access to health coverage and preventive services. For more information, please visit www.healthcare.gov.

The authors noted that nearly 32 percent of survivors experienced limitations in their usual daily activities outside of work because of cancer. Among those employed, more than 42 percent had to make changes to their work hours and duties. Comprehensive health and employment intervention programs may be needed to improve outcomes for cancer survivors and their families.

The findings in this report support data released in a recent CDC study about the significant financial challenges experienced by survivors of adolescent and young adult cancers.

The full report “Medical Costs and Productivity Losses of Cancer Survivors – United States, 2008-2011” can be found at www.cdc.gov/mmwr.