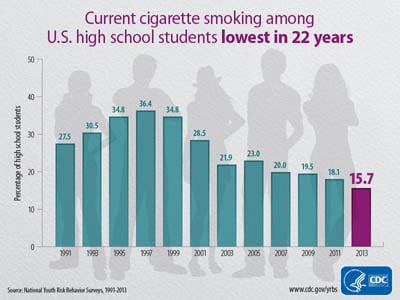 Cigarette smoking rates among high school students have dropped to the lowest levels since the National Youth Risk Behavior Survey (YRBS) began in 1991, according to the 2013 results released today by the Centers for Disease Control and Prevention.

By achieving a teen smoking rate of 15.7 percent, the United States has met its national Healthy People 2020 objective of reducing adolescent cigarette use to 16 percent or less.

Despite this progress, reducing overall tobacco use remains a significant challenge. For example, other national surveys show increases in hookah and e-cigarette use. In the YRBS, no change in smokeless tobacco use was observed among adolescents since 1999, and the decline in cigar use has slowed in recent years, with cigar use now at 23 percent among male high school seniors.

“It’s encouraging that high school students are making better health choices such as not fighting, not smoking, and not having sex,” said CDC Director Tom Frieden, M.D., M.P.H. “Way too many young people still smoke and other areas such as texting while driving remain a challenge. Our youth are our future.We need to invest in programs that help them make healthy choices so they live long, healthy lives.”

The YRBS provides data related to behaviors that contribute to unintentional injuries and violence. The 2013 survey found encouraging reductions in physical fighting among adolescents:

For the first time, the surveys conducted by states and large urban school districts gathered information on texting and e-mailing by adolescents while driving. The survey’s findings indicate that the use of technology while driving continues to put youth at risk:

The report also indicates varied trends in obesity-related behaviors in recent years, such as excessive screen time and drinking sugar-sweetened beverages like soda.

“The Youth Risk Behavior Survey is an important tool for understanding how health risk behaviors among youth vary across the nation and over time,” said Laura Kann, Ph.D., chief of CDC’s School-Based Surveillance Branch. “We can use these data to help schools, communities, families, and students reduce youth risk behaviors that are still prevalent and to monitor those that are newly emerging.”

CDC’s YRBSS is the only surveillance system designed to monitor a wide range of priority health risk behaviors among representative samples of high school students at the national, state, and local levels. National, state, and large urban school district surveys are conducted every two years among high school students throughout the United States. These surveys monitor priority health risk behaviors including unintentional injuries and violence; sexual behaviors that contribute to unintended pregnancy and sexually transmitted diseases, including HIV infection; tobacco, alcohol, and other drug use; unhealthy dietary behaviors; and physical inactivity. These surveys also monitor obesity and asthma.

More than 13,000 U.S. high school students participated in the 2013 National YRBS. Parental permission was obtained for students to participate in the survey, student participation was voluntary, and responses were anonymous. States and large urban school districts could modify the questionnaire for their own surveys to meet their needs. The 2013 YRBSS report includes National YRBS data and data from surveys conducted in 42 states and 21 large urban school districts.

The National YRBS is one of three HHS-sponsored surveys that provide data on substance abuse among youth nationally. The others are the National Survey on Drug Use and Health (NSDUH), sponsored by the Substance Abuse and Mental Health Services Administration – a primary source of statistics on substance use among Americans age 12 and older (www.oas.samhsa.gov/nhsda.htm); and the Monitoring the Future (MTF) study funded by the National Institute on Drug Abuse – part of the National Institutes of Health– and conducted by the University of Michigan’s Institute for Social Research (http://monitoringthefuture.org). The MTF study tracks substance use and related attitudes among students in the 8th, 10th, and 12th grades.

The 2013 YRBS data are available at www.cdc.gov/yrbs.