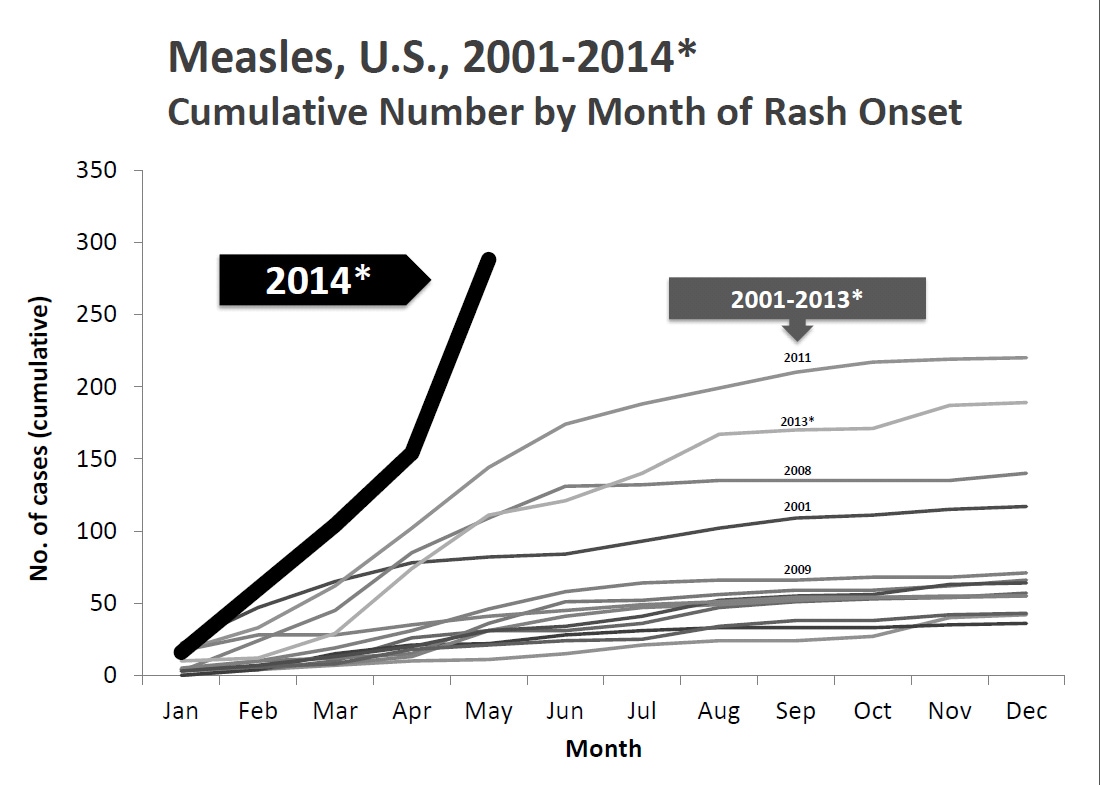 Two hundred and eighty-eight cases of measles were reported to the Centers for Disease Control and Prevention (CDC) in the United States between Jan. 1 and May 23, 2014. This is the largest number of measles cases in the United States reported in the first five months of a year since 1994. Nearly all of the measles cases this year have been associated with international travel by unvaccinated people.

“The current increase in measles cases is being driven by unvaccinated people, primarily U.S. residents, who got measles in other countries, brought the virus back to the United States and spread to others in communities where many people are not vaccinated,” said Dr. Anne Schuchat, assistant surgeon general and director of CDC’s National Center for Immunizations and Respiratory Diseases. “Many of the clusters in the U.S. began following travel to the Philippines where a large outbreak has been occurring since October 2013.”

Of the 288 cases, 280 (97 percent) were associated with importations from at least 18 countries. More than one in seven cases has led to hospitalization. Ninety percent of all measles cases in the United States were in people who were not vaccinated or whose vaccination status was unknown. Among the U.S. residents who were not vaccinated, 85 percent were religious, philosophical or personal reasons.

The large number of measles cases this year stresses the importance of vaccination. Healthcare providers should use every patient encounter to ensure that all their patients are up to date on vaccinations; especially, before international travel.

More than ever health care providers need to be alert to the possibility of measles and be familiar with the signs and symptoms so they can detect cases early.

“Many U.S. health care providers have never seen or treated a patient with measles because of the nation’s robust vaccination efforts and our rapid response to outbreaks,” said Schuchat.

Patients who present with fever and rash along with cough, runny nose, or pink eye should be evaluated for measles; especially, if the patient is unvaccinated and recently traveled internationally or was exposed to someone else who has measles or recently traveled. If healthcare providers suspect a patient with measles, they should immediately isolate the patient to help prevent the disease from spreading, immediately report the case to their local health department and collect specimens for serology and viral testing.

Timely vaccination is the best way to prevent measles. Infants and young children are at high risk of getting a serious case of measles. CDC recommends two doses of measles, mumps, and rubella (MMR) vaccine for everyone starting at age 12 months. For those travelling internationally, CDC recommends that all U.S. residents older than 6 months receive MMR vaccine, if needed, prior to departure.

Measles is a serious respiratory disease that is highly contagious. Anyone who is not protected against the disease is at risk, especially if they travel internationally. Measles is still common in many parts of the world, including countries in Europe, Asia, the Pacific, and Africa. Worldwide, an estimated 20 million people get measles and 122,000 die from the disease each year. Measles was declared eliminated from the United States in 2000, meaning that there was no longer continuous measles transmission for more than 12 months.

For more information about the report, visit www.cdc.gov/mmwr.