Premature deaths from each cause due to modifiable risks 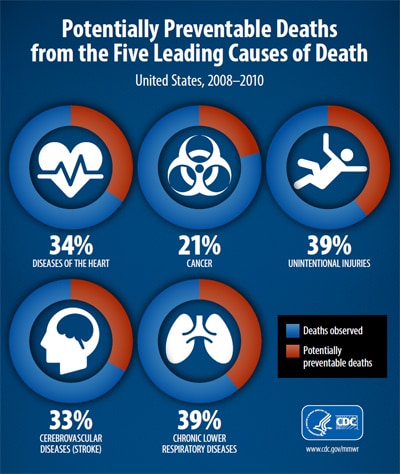 Each year, nearly 900,000 Americans die prematurely from the five leading causes of death – yet 20 percent to 40 percent of the deaths from each cause could be prevented, according to a study from the Centers for Disease Control and Prevention.

The five leading causes of death in the United States are heart disease, cancer, chronic lower respiratory diseases, stroke, and unintentional injuries. Together they accounted for 63 percent of all U.S. deaths in 2010, with rates for each cause varying greatly from state to state. The report, in this week’s issue of CDC’s weekly journal, Morbidity and Mortality Weekly Report, analyzed premature deaths (before age 80) from each cause for each state from 2008 to 2010. The authors then calculated the number of deaths from each cause that would have been prevented if all states had same death rate as the states with the lowest rates.

The study suggests that, if all states had the lowest death rate observed for each cause, it would be possible to prevent:

“As a doctor, it is heartbreaking to lose just one patient to a preventable disease or injury – and it is that much more poignant as the director of the nation’s public health agency to know that far more than a hundred thousand deaths each year are preventable,” said Tom Frieden, MD, MPH. “With programs such as the CDC’s Million Hearts initiative, we are working hard to prevent many of these premature deaths.”

The numbers of preventable deaths from each cause cannot be added together to get an overall total, the authors note. That’s because prevention of some premature deaths may push people to different causes of death. For example, a person who avoids early death from heart disease still may die prematurely from another preventable cause, such as an unintentional injury.

Modifiable risk factors are largely responsible for each of the leading causes of death: 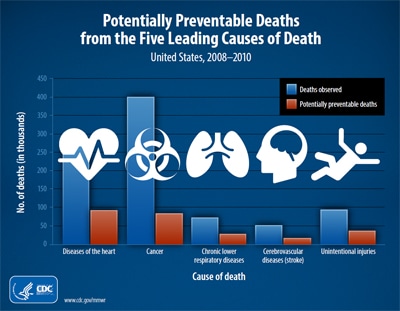 Many of these risks are avoidable by making changes in personal behaviors. Others are due to disparities due to the social, demographic, environmental, economic, and geographic attributes of the neighborhoods in which people live and work. The study authors note that if health disparities were eliminated, as called for in Healthy People 2020, all states would be closer to achieving the lowest possible death rates for the leading causes of death.

“We think that this report can help states set goals for preventing premature death from the conditions that account for the majority of deaths in the United States,” said Harold W. Jaffe, MD, the study’s senior author and CDC’s associate director for science. “Achieving these goals could prolong the lives of tens of thousands of Americans.”

Southeastern states had the highest number of preventable deaths for each of the five causes. The study authors suggest that states with higher rates can look to states with similar populations, but better outcomes, to see what they are doing differently to address leading causes of death.