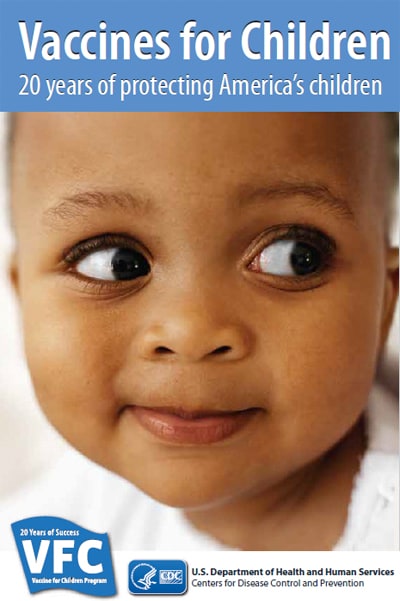 The CDC estimates that vaccinations will prevent more than 21 million hospitalizations and 732,000 deaths among children born in the last 20 years (see Benefits from Immunization during the Vaccines for Children Program Era — United States, 1994-2013, MMWR). Despite the U.S. immunization program’s success, according to CDC officials, 129 people in the U.S. have been reported to have measles this year in 13 outbreaks, as of April 18.

In 1994, the Vaccines for Children program (VFC) was launched in direct response to a measles resurgence in the United States that caused tens of thousands of cases and over a hundred deaths, despite the availability of a measles vaccine since 1963. The VFC program provides vaccines to children whose parents or caregivers might otherwise be unable to afford them.

This year’s 20th anniversary of the VFC program’s implementation is occurring during an increase in measles cases in the U.S. In 2013, 189 Americans had measles. In 2011, 220 people in the U.S. were reported as having measles–the highest number of annual cases since 1996.

“Thanks to the VFC program, children in our country are no longer at significant risk from diseases that once killed thousands each year,” said CDC Director Tom Frieden, M.D., M.P.H. “Current outbreaks of measles in the U.S. serve as a reminder that these diseases are only a plane ride away. Borders can’t stop measles, but vaccination can.”

The CDC reports 34 people, among the 129 cases this year, brought measles into the U.S. after being infected in other countries. Though not direct imports, most of the remaining cases are known to be linked to importations. Most people who reported having measles in 2014 were not vaccinated or did not know their vaccination status.

Because measles is a highly contagious disease, it can spread quickly among unvaccinated people. The CDC recommends people of all ages keep up to date with their vaccinations. CDC recommends two doses of MMR (measles, mumps, and rubella) vaccine for everyone starting at age 12 months. Infants 6 through 11 months old should receive 1 dose of MMR vaccine before international travel.

For children born during the VFC era, the U.S. immunization program continues to pay enormous benefits. According to analysis by the CDC, hospitalizations avoided and lives saved through vaccination will save nearly $295 billion in direct costs and $1.38 trillion in total societal costs. Parents can learn more about the VFC program at http://www.cdc.gov/features/vfcprogram/.

April 26th is the start of National Infant Immunization Week, which will bring together communities across the country in raising awareness about the importance immunization. For more information, go to www.cdc.gov/vaccines.

However, not all diseases that threaten U.S. borders can be prevented today by vaccines and require different strategies to protect Americans. “The health security of the United States is only as strong as the health security of all nations around the world. We are all connected by the food we eat, the water we drink, and air we breathe,” said Dr. Frieden. “Stopping outbreaks where they start is the most effective and least costly way to prevent disease and save lives at home and abroad – and it’s the right thing to do.”

The Affordable Care Act (ACA), also known as the health care law, was created to expand access to coverage, control health care costs, and improve health care quality and coordination. Under ACA, more Americans than ever will qualify to get health care coverage that fits their needs and budget, including important preventive services such as vaccine coverage available at no cost for eligible children through the Vaccines for Children Program. Visit Healthcare.govor call 1-800-318-2596(TTY/TDD 1-855-889-4325) to learn more.