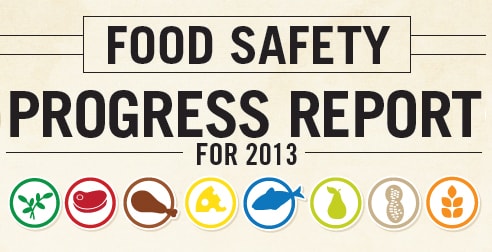 The nation’s food safety grades are out and the results are mixed. CDC’s annual report card shows that foodborne infections continue to be an important public health problem in the United States.

The rate of salmonella infections decreased by about nine percent in 2013 compared with the previous three years, bringing it to the rate last observed in the 2006-2008 baseline period. But campylobacter infections, often linked to dairy products and chicken, have risen 13 percent since 2006-2008. Vibrio infections, often linked to eating raw shellfish, were at the highest level observed since active tracking began in 1996; however, rates of infections caused by Vibrio vulnificus, the most severe species, have remained steady. Rates of the other foodborne infections tracked have not changed since the period between 2006 and2008.

“CDC data are essential to gauge how we’re doing in our fight against foodborne illness,” said Robert Tauxe, M.D., M.P.H, deputy director of CDC’s Division of Foodborne, Waterborne and Environmental Diseases. “This year’s data show some recent progress in reducing salmonella rates, and also highlight that our work to reduce the burden of foodborne illness is far from over. To keep salmonella on the decline, we need to work with the food industry and our federal, state and local partners to implement strong actions to control known risks and to detect foodborne germs lurking in unsuspected foods.”

The data for the report card come from the Foodborne Diseases Active Surveillance Network (FoodNet), a group of experts from CDC, ten state health departments, the U.S. Department of Agriculture’s Food Safety and Inspection Service (FSIS), and the U.S. Food and Drug Administration (FDA). In 2013, FoodNet logged just over 19,000 infections, 4,200 hospitalizations, and 80 deaths from the nine germs it tracks. Young children were the most affected group for seven of the nine germs that FoodNet tracks.

New standards for cut-up poultry parts and plans to modernize poultry inspection are already in the works to increase the safety of chicken. Regulations designed to help prevent food safety problems have been proposed for many sectors of the food industry, including produce farms, food facilities, food importers, food transporters, and third-party auditors/certification bodies.

“Steps are underway to address many of the concerns raised in this report, such as our Salmonella Action Plan and other plans to modernize food inspection,” said Assistant Administrator for FSIS’ Office of Public Health Science David Goldman, M.D., M.P.H.. “As these actions are being implemented, we are beginning to see progress, and I am confident we will see further improvement over time.”

“The latest information from FoodNet highlights the importance of continuing preventive measures from the farm to the consumer,” said Stephen Ostroff, M.D., the FDA’s acting chief scientist. “We are making significant progress in implementing the FDA Food Safety Modernization Act, having issued seven proposed rules addressing the safety of produce, imported foods, and human and animal food production and transportation. Full implementation of these rules will help prevent these types of infections.”

In addition to new regulations, everyone can help prevent food poisoning. The food industry can require safer ingredients and can implement preventative controls while restaurants and consumers should follow safe practices in the kitchen. These include cooking meat to proper temperatures, washing produce, preparing meat and fresh produce on different surfaces. Consumers should know there are risks to consuming unpasteurized milk, soft cheeses made with unpasteurized milk, and raw oysters, especially for certain populations at risk for foodborne illness. For more information on avoiding illnesses from food, and knowing who is at greatest risk, please visit www.foodsafety.gov.

About FoodNet
FoodNet collects information to track rates and determine trends in laboratory-confirmed illnesses caused by nine pathogens transmitted commonly by food: campylobacter, cryptosporidium, cyclospora, listeria, salmonella, Shiga toxin-producing O157 and non-O157E. coli, shigella, vibrio, and yersinia. Annual data are compared with data from the previous three years (2010-2012) and with data from 2006-2008 to measure progress. Since 2010, FoodNet has been tracking the increasing use of culture‐independent diagnostic tests instead of culture by clinical laboratories for diagnosis of some bacterial enteric infection. Replacement of culture challenges the ability to identify cases, monitor trends, detect outbreaks, and characterize pathogens. FoodNet is a network of experts from CDC, ten state health departments, the USDA’s Food Safety and Inspection Service, and the FDA. FoodNet surveillance covers 48 million people, encompassing about 15 percent of the American population. FoodNet sites are located in Connecticut, Georgia, Maryland, Minnesota, New Mexico, Oregon, and Tennessee, and selected counties in California, Colorado, and New York.