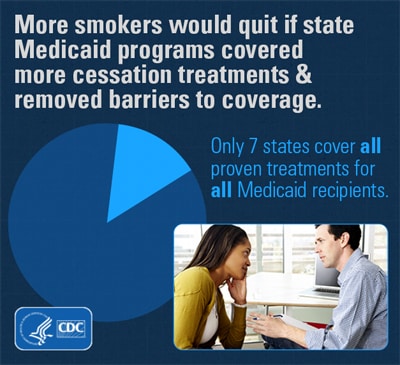 Americans enrolled in Medicaid are more likely to smoke than the general population, and smoking-related disease is a major contributor to increasing Medicaid costs. Insurance coverage of proven cessation treatments leads to more smokers using the treatments and successfully quitting smoking. A recent study from the American Journal of Preventive Medicine found that more comprehensive state Medicaid coverage was associated with increased quit rates among smokers enrolled in Medicaid.

Seven states cover all approved medications and in-person counseling cessation treatments for all Medicaid recipients. All states have some barriers to getting these treatments. The most common barriers are limits on how long treatment is covered and how much is covered per year; prior authorization requirements; and copayments.

“There’s evidence suggesting that smokers enrolled in Medicaid, like other smokers, want to quit and will take advantage of covered cessation treatments to help them quit for good,” said Stephen Babb, M.P.H., co-author of the article.

Some of the strongest evidence comes from Massachusetts, which expanded its Medicaid cessation coverage in 2006.

“Massachusetts heavily promoted its new Medicaid cessation coverage to Medicaid enrollees and health care providers, and saw a drop in the smoking rate among Medicaid enrollees from 38 percent to 28 percent,” said Babb. There was also an almost 50 percent drop in hospital admissions for heart attacks among those who used the benefit. It is important that all smokers who want help quitting, including smokers enrolled in Medicaid, have access to proven cessation treatments and services.”

Fifty years after the first Surgeon General’s Report linking cigarette smoking to lung cancer, smoking remains the leading cause of preventable death and disease in the United States, killing nearly half a million Americans every year. More than 16 million Americans live with a smoking-related disease. Smoking-related diseases cost Americans $132 billion a year in direct health care expenses, much of which comes in taxpayer-supported payments. The most recent Surgeon General’s Report, released in January 2014, recommends providing barrier-free access to proven cessation treatments, and expanding cessation services for all smokers in primary and specialty care settings.

Through the Affordable Care Act, more Americans will qualify to get health care coverage that fits their needs and budget, including important preventive services such as certain services to quit smoking that may be covered with no additional costs. Visit Healthcare.gov or call 1-800-318-2596 (TTY/TDD 1-855-889-4325) to learn more.