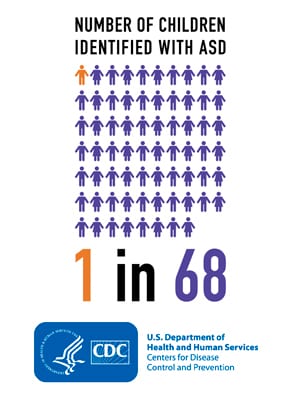 Number of children identified with ASD: 1 in 68

The data continue to show that ASD is almost five times more common among boys than girls: 1 in 42 boys versus 1 in 189 girls. White children are more likely to be identified as having ASD than are black or Hispanic children.

“Community leaders, health professionals, educators and childcare providers should use these data to ensure children with ASD are identified as early as possible and connected to the services they need,” said Coleen Boyle, Ph.D., M.S. hyg., director of CDC’s National Center on Birth Defects and Developmental Disabilities.

The report also shows most children with ASD are diagnosed after age 4, even though ASD can be diagnosed as early as age 2. Healthy People 2020, the nation’s 10-year health objectives, strives to increase the proportion of young children with an autism spectrum disorder (ASD) and other developmental delays who are screened, evaluated, and enrolled in early intervention services in a timely manner.

“The most important thing for parents to do is to act early when there is a concern about a child’s development,” said Marshalyn Yeargin-Allsopp, M.D., chief of CDC’s Developmental Disabilities Branch. “If you have a concern about how your child plays, learns, speaks, acts, or moves, take action. Don’t wait.”

If you suspect that your child may have ASD:

CDC’s “Learn the Signs. Act Early.” program has joined with others across the federal government to promote developmental and behavioral screening through the Birth to 5: Watch Me Thrive campaign, which will be launched today. The program will help families look for and celebrate milestones; promote universal screenings; identify delays as early as possible; and improve the support available to help children succeed in school and thrive alongside their peers.

Through the Affordable Care Act, more Americans will have access to health coverage and to no-cost preventive services, including autism screening for children at 18 and 24 months. Most health insurance plans are no longer allowed to deny, limit, or exclude coverage to anyone based on a pre-existing condition, including persons with autism spectrum disorder. Visit Healthcare.gov or call 1-800-318-2596 (TTY/TDD 1-855-889-4325) to learn more. Open enrollment in the Marketplace began October 1 and ends March 31, 2014.

For additional information on: