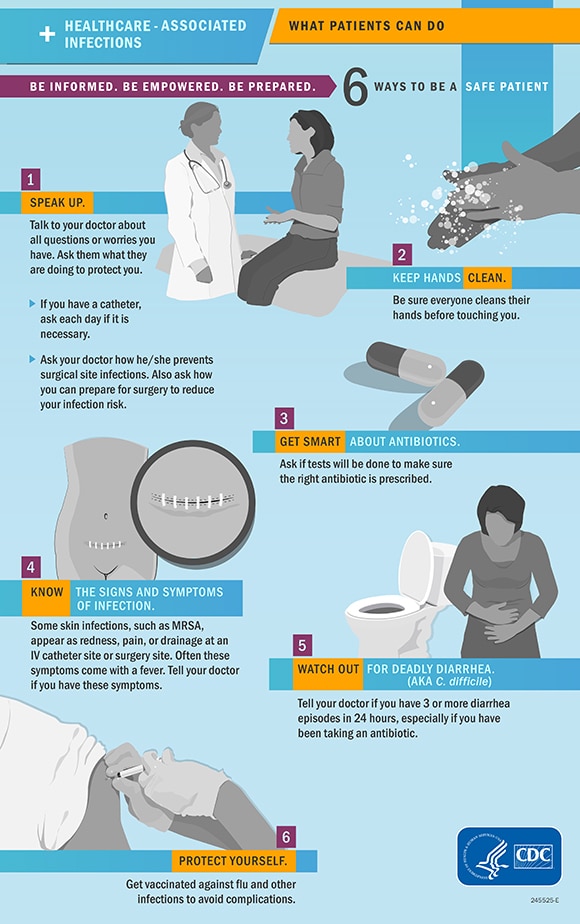 What Patients Can Do: Six Ways To Be A Safe Patient.
Entire Infographicpdf icon

On any given day, approximately one in 25 U.S. patients has at least one infection contracted during the course of their hospital care, adding up to about 722,000 infections in 2011, according to new data from the Centers for Disease Control and Prevention. This information is an update to previous CDC estimates of healthcare-associated infections.

The agency released two reports today – one, a New England Journal of Medicine article detailing 2011 national healthcare-associated infection estimates from a survey of hospitals in ten states, and the other a 2012 annual report on national and state-specific progress toward U.S. Health and Human Services HAI prevention goals. Together, the reports show that progress has been made in the effort to eliminate infections that commonly threaten hospital patients, but more work is needed to improve patient safety.

“Although there has been some progress, today and every day, more than 200 Americans with healthcare-associated infections will die during their hospital stay,” said CDC Director Tom Frieden, M.D., M.P.H. “The most advanced medical care won’t work if clinicians don’t prevent infections through basic things such as regular hand hygiene. Health care workers want the best for their patients; following standard infection control practices every time will help ensure their patients’ safety.”

The second report, CDC’s National and State Healthcare-associated Infection Progress Report, includes a subset of infection types that are commonly required to be reported to CDC. On the national level, the report found a:

“Our nation is making progress in preventing healthcare-associated infections through three main mechanisms: financial incentives to improve quality, performance measures and public reporting to improve transparency, and the spreading and scaling of effective interventions,” said Patrick Conway, M.D., Deputy Administrator for Innovation and Quality for Centers for Medicare & Medicaid Services (CMS) and CMS chief medical officer. “This progress represents thousands of lives saved, prevented patient harm, and the associated reduction in costs across our nation.”

The federal government considers elimination of health care-associated infections a top priority and has a number of ongoing efforts to protect patients and improve health care quality. In addition to CDC’s expertise and leadership in publishing evidence-based infection prevention guidelines, housing the nation’s healthcare-associated infection laboratories, responding to health care facility outbreaks and tracking infections in these facilities, other federal and non-federal partners are actively working to accelerate the prevention progress that is happening across the country. These initiatives are coordinated through the National Action Plan to Prevent Healthcare-Associated Infections and include CMS’ Partnership for Patients, CMS Quality Improvement Organizations, and the Agency for Healthcare Research and Quality’s Comprehensive Unit-based Safety Program.

The Progress Report looked at data submitted to CDC’s National Healthcare Safety Network (NHSN), the nation’s healthcare-associated infection tracking system, which is used by more than 12,600 health care facilities across all 50 states, Washington, D.C., and Puerto Rico. Not all states reported or had enough data to calculate valid infection information on every infection in this report. The number of infections reported was compared to a national baseline.

Expanding upon current patient safety goals, the FY 2015 President’s Budget requests funding for CDC to increase the detection of antibiotic resistant infections and improve efforts to protect patients from infections, including those detailed in today’s CDC reports. Additionally the President’s Budget requests an increase for the National Healthcare Safety Network to fully implement tracking of antibiotic use and antibiotic resistance threats in U.S. hospitals.