Thousands receive treatment prior to coming to the United States 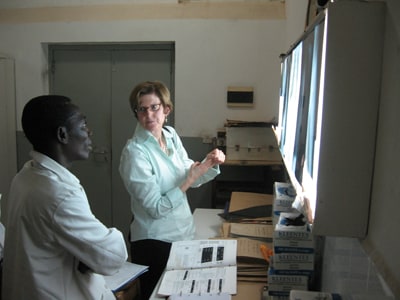 Updated CDC recommendations for overseas tuberculosis (TB) screening of immigrants and refugees have identified hundreds of cases that otherwise would have gone undetected until after arrival in the United States, saving taxpayers an additional $15 million in medical costs.

In 2012, the most recent year for which data are available, overseas physicians identified more than 1,100 cases of tuberculosis, including 14 cases of multidrug-resistant (MDR) TB, according to a report published in CDC’s MMWR today. Due to screening changes that require newer, more sensitive sputum-culture tests, about 60 percent of the cases – about 660 cases plus the 14 MDR TB cases – would not previously have been identified and treated prior to coming to the United States.

The $15 million cost savings estimate is a rough estimate based on the cost of treating TB cases that would not have otherwise been identified and treated prior to the immigrants’ and refugees’ arrival in the United States. Those costs are primarily borne by U.S. public health departments, both federal and state, that provide care and treatment for TB patients diagnosed after their arrival. Additional economic analyses are under way.

“This program has been one of the largest and most successful interventions in U.S. tuberculosis control during the past decade,” said Martin Cetron, M.D., director of CDC’s Division of Global Migration and Quarantine. “In addition to creating major savings in health care costs, is the program ensures that immigrants and refugees get prompt care and correct treatment, which is vital to their health, the health of their loved ones, and the U.S. communities where they settle.”

More than one-third of the world’s population is thought to be infected with Mycobacterium tuberculosis, the bacterium that causes TB. In 2012, nearly 9 million people around the world became sick with TB disease. Since the early 1900s, immigrants and refugees applying for a visa to come to the United States undergo a medical examination that includes TB screening. Prior to 2007, applicants received a chest X-ray and microscopic sputum smear test to identify persons with active TB. Those who had a positive smear test received TB treatment prior to arriving in the United States. However, these tests often missed persons with mild cases of TB. In 2007, CDC began implementing new requirements, which require people suspected of having tuberculosis to receive a much more sensitive sputum culture test to confirm TB so that patients receive treatment prior to arriving in the United States. These requirements have now been completely rolled out to all countries with U.S.-bound immigrants.

During the past 20 years, people born abroad have made up a larger and larger proportion of U.S. TB cases. Currently, 65 percent of people in the United States with TB are foreign-born. The change in screening procedures is estimated to have decreased the percentage of immigrants and refugees who tested negative for TB, while abroad, but who developed TB after their arrival from 7 percent to 1 to 2 percent.

In addition to requiring sputum cultures, the 2007 guidelines require testing of children ages 2-14 who are coming to the United States from countries with high rates of TB since TB often goes undetected in children. The 2007 guidelines also require the use of directly observed therapy (DOT), the gold standard for treatment. DOT is a practice where health care professionals administer and document each dose of medicine throughout the entire course of treatment.