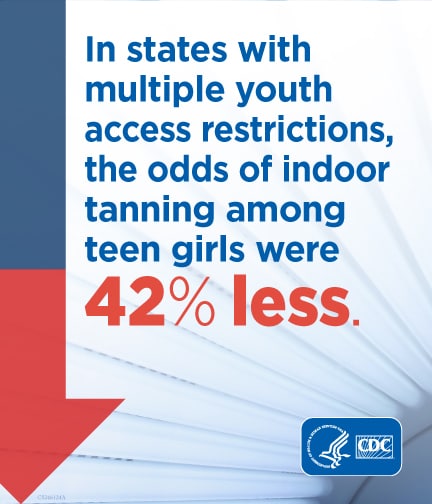 In states with mulitple youth restrictions, the odds of indoor tanning among teen girls were 42% less.

Skin cancer is the most common form of cancer in the United States. Approximately 3.5 million cases of nonmelanoma skin cancers are treated annually, and over 60,000 melanomas are diagnosed annually. While most cancers have been on the decline since the 1990s, melanomas, which are the most fatal of skin cancers, have been on the rise, especially among young women. Increased exposure to ultraviolet radiation through indoor tanning may be partially responsible for the continued increase in melanoma.

States with laws that included systems access, parental permission, and age restrictions had the lowest rates of indoor tanning among teen girls. This is the first study to look at the impact of such laws on indoor tanning rates.

The World Health Organization recommends that no one under the age of 18 years use indoor tanning. The Food and Drug Administration has proposed reclassifying indoor tanning devices from low- to moderate-risk devices. The proposed order advises against the use of indoor tanning among minors aged younger than 18 years.

The full study can be found at www.ajph.org on Thursday, February 13 at 4 p.m. ET. The printed version will be published in April.