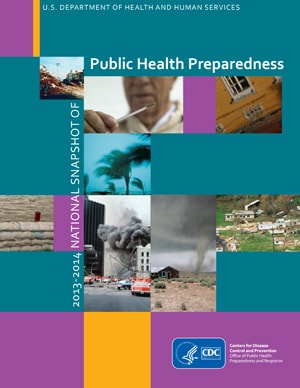 Between 2012-2013, the Centers for Disease Control and Prevention supported multiple state and local public health responses, helping to strengthen the front lines of public health defense and bolster the nation’s health security. Examples of these responses, as well as an assessment of state and select local preparedness, are included in 2013-2014 National Snapshot of Public Health Preparedness, the sixth annual report from CDC’s Office of Public Health Preparedness and Response released today.

“CDC support for state emergency preparedness is vital to the health security of Americans,” said CDC Director Tom Frieden, M.D., M.P.H. “The lives protected by the public health response to Hurricane Sandy, the fungal meningitis outbreak, and the tornadoes in Joplin are just a few examples of how communities and CDC can work together to protect the public’s health when its needed most.”

Highlights from the report

“The ability of our local and state health departments to be innovative and maintain a steady level of preparedness despite extensive budget cuts is reassuring,” said Ali Khan, M.D., M. P. H., director CDC’s Office of Public Health Preparedness and Response. “However, preventing an erosion of our nation’s health security will be difficult in the current fiscal environment.”

This report, used in tandem with the recently released National Health Security Preparedness Index, an annual measure of the country’s health security at the national and state level, can help gauge America’s ability to prepare and respond to future public health threats.