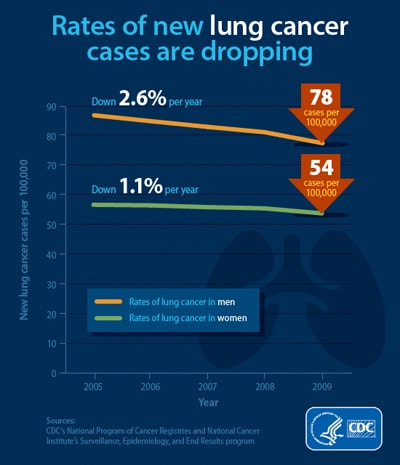 Tobacco control efforts are having a major impact on Americans’ health, a new analysis of lung-cancer data suggests. The rate of new lung cancer cases decreased among men and women in the United States from 2005 to 2009, according to a report in this week’s Morbidity and Mortality Weekly Report.

“These dramatic declines in the number of young adults with lung cancer show that tobacco prevention and control programs work – when they are applied,” said CDC Director Tom Frieden, M.D., M.P.H.

Lung cancer is the leading cause of cancer death and the second most commonly diagnosed cancer among both men and women in the United States. Most lung cancers are attributable to cigarette smoking and secondhand smoke. Because smoking behaviors among women are now similar to those among men, women are now experiencing the same risk of lung cancer as men.

“While it is encouraging that lung cancer incidence rates are dropping in the United States, one preventable cancer is one too many,” Dr. Frieden said. “Implementation of tobacco control strategies is needed to reduce smoking prevalence and the lung cancer it causes among men and women.”

In 2010, states appropriated only 2.4 percent of their tobacco revenues for tobacco control. An earlier CDC study showed that states vary widely in their success at reducing smoking – and in reducing new lung cancers.

In the new report, CDC used data from the National Program of Cancer Registries and the National Cancer Institute’s Surveillance, Epidemiology, and End Results program for the period 2005–2009 to assess lung cancer incidence rates and trends among men and women by age group.

Lung cancer incidence decreased among men in all U.S. Census regions and 23 states, and decreased among women in the South and West and seven states. Rates were stable in all other states. These declines reflect the successes of past tobacco prevention and control efforts.

The study indicates that continued attention to local, state, and national population-based tobacco prevention and control strategies are needed to achieve further reductions in smoking prevalence among both men and women of all ages to reduce subsequent lung cancer in the United States. Strategies proven to reduce tobacco use among youth and adults include increased tobacco prices, comprehensive smoke-free laws, restriction of tobacco advertising and promotion, and hard-hitting mass media and community engagement campaigns.

This month marks the 50th anniversary of the first Surgeon General’s Report linking cigarette smoking to lung cancer. Smoking remains the leading cause of preventable death and disease in the United States. Millions of Americans are living with a smoking-related disease, and each day more than 2,100 youth and young adults become daily smokers.

Through the Affordable Care Act, more Americans will qualify to get health care coverage that fits their needs and budget, including important preventive services such as tobacco use screenings and tobacco cessation services that may be covered with no additional costs. Visit Healthcare.gov or call 1-800-318-2596 (TTY/TDD 1-855-889-4325) to learn more. Open enrollment in the Marketplace began Oct. 1 and ends March 31, 2014.