Most health care providers don’t talk about alcohol, even when patients drink too much

Alcohol screening and counseling is an effective but underused health service 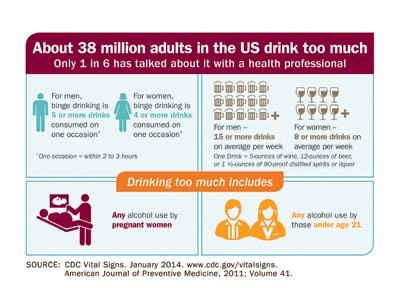 About 38 million adults in the U.S. drink too much
Entire Infographic

Only one in six adults — and only one in four binge drinkers — say a health professional has ever discussed alcohol use with them even though drinking too much is harmful to health, according to a new Vital Signs report from the Centers for Disease Control and Prevention.

Even among adults who binge drink 10 or more times a month, only one in three have ever had a health professional talk with them about alcohol use. Binge drinking is defined as consuming four or more drinks for women and five or more drinks for men within 2-3 hours. Talking with a patient about their alcohol use is an important first step in screening and counseling, which has been proven effective in helping people who drink too much to drink less.

A drink is defined as five ounces of wine, 12 ounces of beer, or 1.5 ounces of 80-proof distilled spirits or liquor. At least 38 million adults in the United States drink too much. Most are not alcoholics. Drinking too much causes about 88,000 deaths in the United States each year, and was responsible for about $224 billion in economic costs in 2006. It can also lead to many health and social problems, including heart disease, breast cancer, sexually transmitted diseases, fetal alcohol spectrum disorders, motor-vehicle crashes, and violence.

Alcohol screening and brief counseling can reduce the amount of alcohol consumed on an occasion by 25 percent among those who drink too much. It is recommended for all adults, including pregnant women. As with blood pressure, cholesterol and breast cancer screening, and flu vaccination, it has also been shown to improve health and save money. Through the Affordable Care Act, alcohol screening and brief counseling can be covered by most health insurance plans without copay.

“Drinking too much alcohol has many more health risks than most people realize,” said CDC Director Tom Frieden, M.D., M.P.H. “Alcohol screening and brief counseling can help people set realistic goals for themselves and achieve those goals. Health care workers can provide this service to more patients and involve communities to help people avoid dangerous levels of drinking.”

Health professionals who conduct alcohol screening and brief counseling use a set of questions to screen all patients to determine how much they drink and assess problems associated with drinking. This allows them to counsel those who drink too much about the health dangers, and to refer those who need specialized treatment for alcohol dependence. CDC used 2011 Behavioral Risk Factor Surveillance System data to analyze self-reports of ever being “talked with by a health provider” about alcohol use among U.S. adults aged 18 and older from 44 states and the District of Columbia.

No state or district had more than one in four adults report that a health professional talked with them about their drinking, and only 17 percent of pregnant women reported this. Drinking during pregnancy can seriously harm the developing fetus.

For more information about CDC’s efforts in alcohol and public health, visit http://www.cdc.gov/alcohol/

Vital Signs is a CDC report that appears on the first Tuesday of the month as part of the CDC journal Morbidity and Mortality Weekly Report, or MMWR. The report provides the latest data and information on key health indicators. These are cancer prevention, obesity, tobacco use, motor vehicle passenger safety, prescription drug overdose, HIV/AIDS, alcohol use, health care–associated infections, cardiovascular health, teen pregnancy, food safety and viral hepatitis.