Burden of Malaria in Pregnancy in Latin America Not Known

In Latin America, which consists of Central and South America and the Caribbean, an estimated 4 in 100 of pregnancies are affected by malaria. Malaria infection during pregnancy can cause maternal illness and poor birth outcomes, such as infants born with low birth weight. 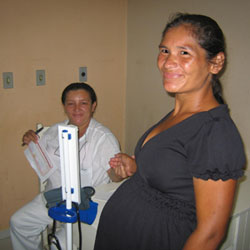 In areas of low malaria transmission, such as Latin America, malaria may cause women to have symptoms of malaria (fever), life-threatening cerebral malaria, respiratory distress syndrome, premature delivery, or spontaneous abortion. Alternatively, many pregnant women will have infections but no symptoms (asymptomatic infections). However, asymptomatic infection can cause moderate to severe maternal anemia, which in turn is associated with low birth weight infants and increased rates of miscarriage and stillbirth.

CDC is now collaborating with other partners in the Malaria in Pregnancy Consortium to determine the burden of malaria in pregnancy. This collaborative effort will also assess how two different malaria parasites, Plasmodium falciparum and P. vivax, affect pregnant women in areas with low malaria transmission. To do this, a facility-based cohort observational study will be conducted in pregnant women in three malaria-endemic countries in Latin America: Brazil, Colombia, and Guatemala.

In areas of moderate to high transmission intensity, such as in sub-Saharan Africa, the World Health Organization recommends that pregnant women be given an antimalarial at a predefined interval during pregnancy to prevent infection and diminish the potential adverse effects of malaria on the mother and fetus. This strategy is known as intermittent preventive treatment (IPTp). This is currently not recommended for use in areas outside of Africa, due to the lack of data on the prevalence and impact of malaria in pregnancy. If the incidence and prevalence of malaria infection in Latin America is low, alternatives to IPTp might be more cost-effective. One strategy might be active detection of malaria infection, whereby pregnant women are screened for malaria parasitemia at each antenatal visit with either rapid diagnostic tests or blood smears. Treatment for malaria would then be provided only if the test is positive. These research findings will help inform strategic approaches to control of malaria in pregnancy, as well as document the clinical impact of these infections in the region.