World Mosquito Day 2020: The Spread of Anopheles stephensi and the Fight Against the World’s Deadliest Animal 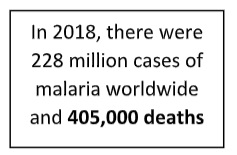 In the enduring struggle against malaria, the primary enemy is, of course, the mosquito—the world’s deadliest animal.

In recognition of World Mosquito Day 2020, we call attention to the troubling spread of one mosquito species in particular: Anopheles stephensi [1].

The worrying spread of Anopheles stephensi to Africa

This photograph depicts an Anopheles stephensi mosquito larva. The adult A. stephensi female, is a known vector for the disease malaria.
Credit: CDC / PHIL

There are more than 3,000 types of mosquitoes—not all created equal. Some bite people, some prefer cows, some live in forests, others prefer cities, some cause itching and irritation, and some carry deadly diseases. In 2012, routine public health tracking activities first detected that a mosquito species called Anopheles stephensi (An. stephensi) had found its way from its native habitat in Southern Asia to Eastern Africa. Initially spotted in Djibouti, it has since been identified in neighboring Ethiopia (2016), Sudan (2019), and Somalia (2019).

An. stephensi—unlike some of its cousins—is an urban vector. It thrives in man-made habitats, where its eggs are laid in water storage containers and wells. It’s also known to actively enter houses. Conversely, the mosquitoes that are primarily responsible for malaria in Eastern Africa, An. gambiae and An. arabiensis, prefer rural habitats.

The introduction of any new mosquito into an area with malaria is a concern. The fact that An. stephensi occupies a different niche than An. arabiensis means that public health workers may need to carry out more intensive mosquito control in urban areas.

If left uncontrolled, models predict further expansion of An. stephensi across Africa which could put an additional 126 million people in 38 countries at increased risk of malaria.

Malaria is not the only parasitic disease spread by mosquitoes: 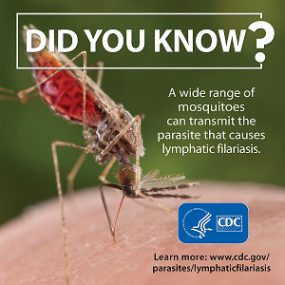 Lymphatic filariasis (LF), one of the world’s most stigmatizing and debilitating diseases, is also spread by the bite of an infected mosquito. More than 120 million people have LF worldwide, and another 1.3 billion live in areas where they are at risk of acquiring the infection.

Like malaria, LF is preventable with timely and targeted interventions. Some countries in Africa have observed an association between scale up of insecticide-treated bed nets for malaria control and a decline in LF cases. This supports the strategy of integrated mosquito control in certain areas: what we do to combat one mosquito-borne disease can help in the fight with others.

CDC plays an important role in the global fight against LF by sharing strategic guidance on mosquito control and other ways to reduce infection risk, such as mass drug administration campaigns. These campaigns provide preventive medication annually to at-risk populations. Currently, CDC and its partners are engaged in efforts to eliminate LF permanently from Haiti and American Samoa.

Learn more about how CDC and partners are working to eliminate LF and other neglected tropical diseases: https://www.cdc.gov/globalhealth/ntd/index.html.