“Recent progress in reducing the human suffering caused by malaria has shown us that, with adequate investments and the right mix of strategies, we can indeed make remarkable strides against this complicated enemy. We should act with urgency and resolve, and remain focused on our shared goal: to create a world in which no one dies of malaria, a world entirely clear of this scourge.” – Margaret Chan, MD; Director-General, World Health Organization

Malaria has been a major cause of illness and death globally for more than 4,000 years. CDC and partners are changing that by working together to reach millions with life-saving prevention and treatment interventions. Through efforts of the Global Fund, the President’s Malaria Initiativeexternal icon, endemic countries, and others partners under the Roll Back Malariaexternal icon Partnership, massive scale-up of malaria interventions has saved more than 4.2 million lives since 2000. It has led to sharp decreases in deaths due to malaria: globally, deaths have fallen by 47% and in sub-Saharan Africa, by 54%. Between 2000 and 2013, expanded malaria interventions helped reduce the incidence of malaria by 30% globally and by 34% in Africa.

Although the impact has been dramatic, approximately 584,000 people died of malaria in 2013, most of them young children in Africa, where malaria burden is highest.

World Malaria Dayexternal icon is recognized on April 25, the date in 2000 when 44 African leaders met in Abuja, Nigeria, and committed their countries to reducing malaria-related deaths. The commemoration provides an opportunity to reflect on the status of global efforts to “roll back malaria.” This year’s theme, “Invest in the future: Defeat malaria,” is a reminder of the need to continue to make progress and defeat malaria. 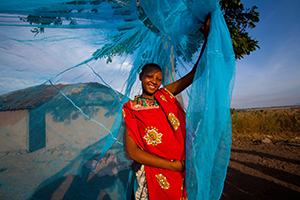 CDC began in 1946 as an agency to control malaria in the United States and continues to provide leadership and expertise in global malaria control activities.

In the last 20 years, CDC has developed and tested the tools that make up the effective intervention package now being used in global efforts worldwide:

CDC also co-implements the President’s Malaria Initiative (PMI)pdf icon, jointly with the U.S. Agency for International Development, in 19 countries in sub-Saharan Africa and in the Greater Mekong Subregion in Asia, helping to scale up evidence-based interventions.

Earlier this year, CDC began leading a consortium of malaria partners aiming to eliminate indigenous cases of malaria on the island of Hispaniola by 2020. The consortium, called the Haiti Malaria Elimination Consortiumexternal icon (HaMEC), is made possible by an initial $29.9 million grant to the CDC Foundation from the Bill & Melinda Gates Foundation.

“Elimination of malaria transmission in Haiti, coupled with eliminating the few remaining cases in the Dominican Republic, will create a malaria-free zone across the Caribbean. This will be an historic public health milestone for the Western Hemisphere, and will greatly reduce the risk of reintroduction of malaria to nearby countries where it’s already been eliminated.” – Larry Slutsker, MD, MPH; Director, CDC Division of Parasitic Diseases and Malaria

Now with changes in the malaria landscape as a result of intervention scale-up and emerging drug and insecticide resistance, CDC is looking at the toolspdf icon we are currently using to maximize their effectiveness. CDC is also developing new tools: new treatment medicines, vaccines, diagnostic tests, and mosquito control methods. CDC has begun to develop effective strategies for using and evaluating them. By testing these tools, CDC ensures we invest wisely in the resources to fight malaria that will have the most success. We are also boosting our efforts to monitor and evaluate approaches to resistance to drugs and insecticides, as well as investigating new ways to collect the strategic information needed to track progress in the fight against malaria.

Malaria in the United States

Malaria was eliminated in the United States by the early 1950s, but on average about 1,500 travelers returning to the United States each year bring back “imported malaria.” If travelers will be visiting an area with malaria transmission, they should be sure to take precautions to prevent the disease.