In This Update
Vaccines

Methods: Estimates were based on an age-stratified, deterministic susceptible-exposed-infectious-removed (SEIR) compartmental model that assessed vaccination impact in the United Kingdom during July–December 2021 in the setting of a return to pre-pandemic social mixing levels. Sensitivity analyses included varying Reff and vaccination coverage. Limitations: Model estimates might not apply to United States; changes in inputs will change outcomes.

Implications: Vaccinating adolescents and children provides direct benefits to those groups and may also provide indirect benefit by reducing SARS-CoV-2 infections, morbidity, and mortality among other age groups.

Methods: Cohort study of 84 pregnant persons, 31 lactating persons, and 16 non-pregnant women aged 18–45 years, December 2020–February 2021. Serum specimens collected after 1st or 2nd doses of BNT162b2 or mRNA-1273 vaccines (and after both in a subset). SARS-CoV-2-specific anti-spike protein antibodies were assessed. Limitations: Small sample size; antibody responses in different gestational stages not examined; specimen collection timing after 2nd dose was different by vaccine; some patients contributed a specimen at single time point; immunologic indicators of protection from infection or disease are not yet established. 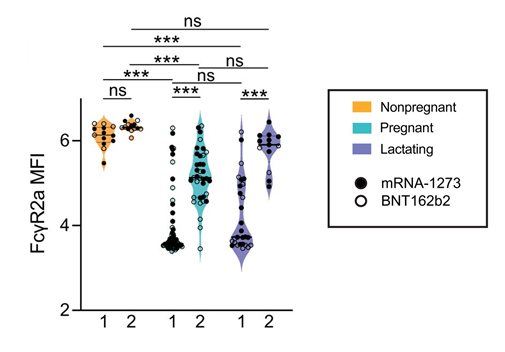 Methods: Prospective cohort study of healthcare workers who received BNT162b2, United Kingdom, December 9, 2020–May 23, 2021. A small subset was longitudinally assessed for antibody, B cell, and T cell responses. Limitations: Only BNT162b2 studied; small sample size; immunologic indicators of protection from infection or disease are not yet established.

Implications: Longer durations between 1st and 2nd doses of an mRNA primary series might enhance post-vaccination immune responses in those who have not been previously infected. 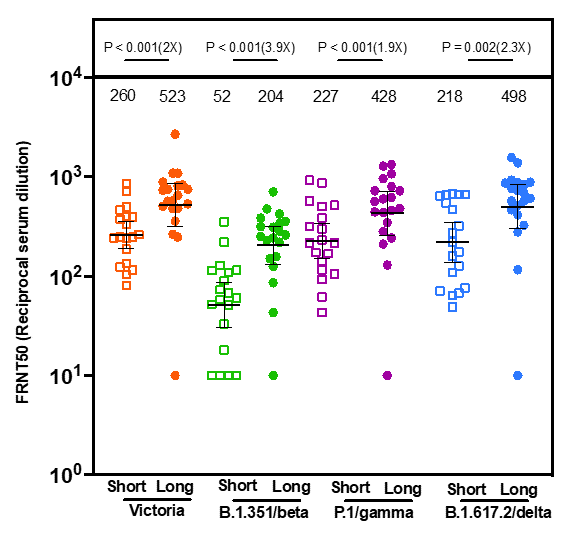 Note: Adapted from Payne et al. Comparison of neutralizing antibodies (y-axis) in participants who were not infected before vaccination against Victoria, B.1.351 (Beta), P.1 (Gamma), and B.1.617.2 (Delta) 4 weeks after 2nd dose in short (n = 19) and long (n = 20) interval participants. Geometric mean neutralizing titers are shown. Numbers in parentheses are fold changes. Numbers directly above each column are median neutralizing antibody titers. FRNT = Focus Reducing Neutralization Titer. Licensed under CC BY 4.0.

Methods: Serostudy of isolates from the Yale SARS-CoV-2 Genomic Surveillance program and clinical specimens from vaccinated healthcare workers (15 previously infected and 17 naïve), November 2020–January 2021. Immune responses to the SARS-CoV-2 ancestral strain, variants of concern/interest, and select lineages with key spike gene mutations were assessed. Limitations: Small sample size; immunologic indicators of protection from infection or disease are not yet established. 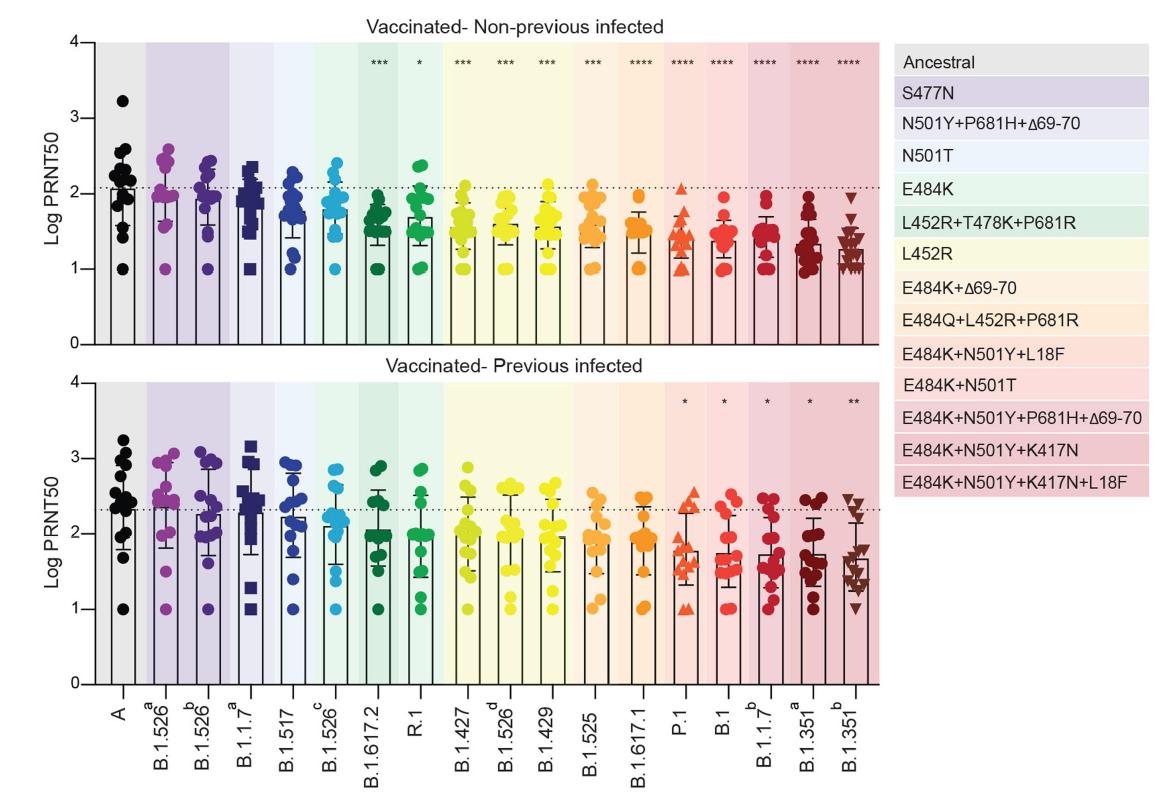 Methods: Systematic review of 57 studies that included 250,351 COVID-19 survivors (79% were hospitalized for COVID-19) evaluated for 38 PASCs occurring 30 days–6 months after acute infection. Limitations: Meta-analysis not performed; may not be representative of patients with mild COVID-19 or patients from middle-to-low income countries; lack of standardized PASC definition; lack of standardized PASC reporting. 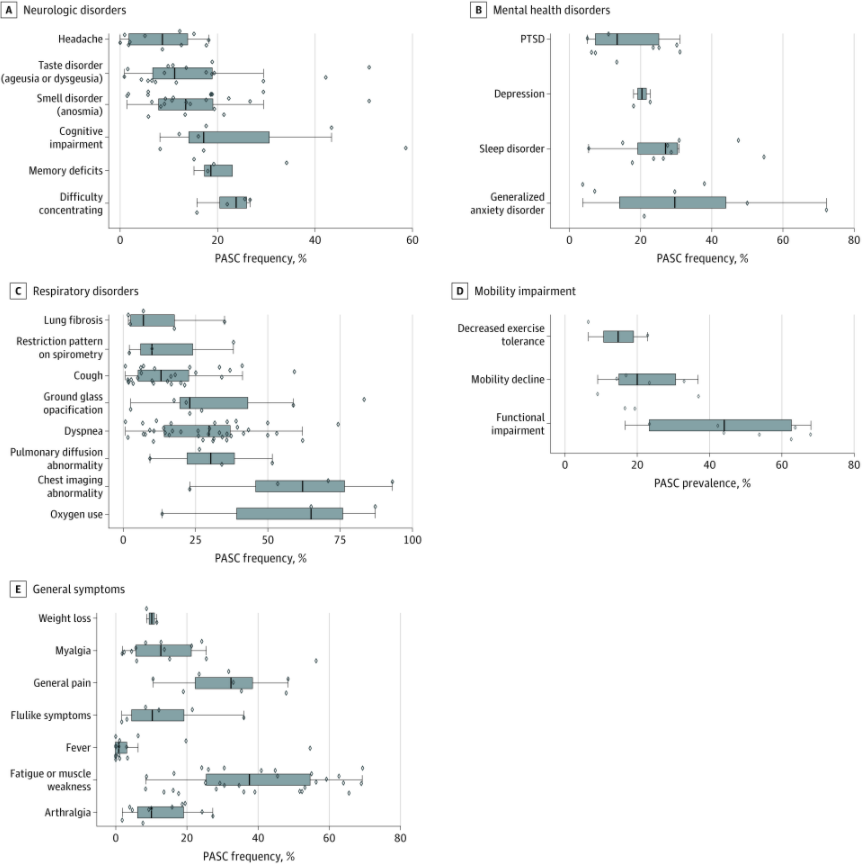 Note: Adapted from Groff et al. Neurologic (A), mental health (B), respiratory (C), mobility (D), and general (E) post-acute sequelae of COVID-19 (PASC). The vertical line in each box plot is the median value for the outcome of interest. The width of the box is the IQR. The whiskers extend to the smallest and largest observations within 1.5 times the IQR of the quartiles. The diamonds represent point estimates for each study included. Licensed under CC BY.

Methods: Cross-sectional study of post-COVID-19 cognitive functioning (mean 7.6 months [SD 2.7] after acute infection) among adults (mean age = 49 years) with no history of dementia. Validated neuropsychological measures used; impairment defined as a z-score of ≤ 1.5 SD below the age-, educational level-, and sex-adjusted norms. Limitations: Sample may not be representative; lack of non-COVID-19 comparison group limits ability to attribute causality to COVID-19 (as opposed to potential effects from severe illness or hospitalization).

Methods: Cross-sectional estimation of relative vaccine uptake, defined as observed share of vaccinations for a racial or ethnic group divided by the expected share of vaccinations (at least 1 dose and proportional to group size), as of March 31, 2021. Vaccination scale-up modeled by census tract under 3 scenarios: (1) continuation of observed disparities; (2) equal uptake by racial and ethnic groups (equalized uptake); and (3) equalized uptake + geographic prioritization. Limitations: Vaccine uptake measured during early phase of vaccine roll-out; incomplete race and ethnicity reporting in state vaccination data; racial and ethnic groups with fewer than 200,000 people in a state not included.

Implications: Modeling data suggest that reducing disparities in vaccine uptake might be achieved by geographic prioritization and group tailoring of vaccine promotion efforts. 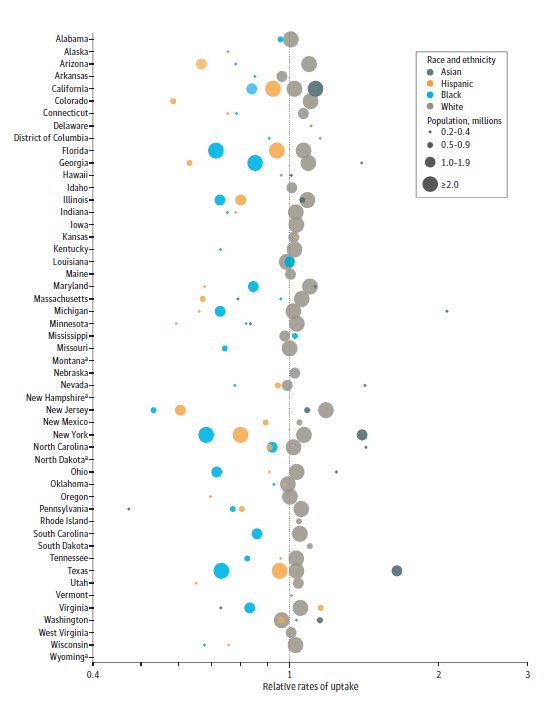 Methods: Descriptive and multilevel modeling of 6 rounds (weeks 22 to 27) of the U.S. Household Pulse survey (n = 443,680) conducted during January to March 2021. Limitations: Data collected when many respondents were not eligible for vaccination.

Implications: Vaccination promotion strategies may need to be tailored to the concerns of specific populations to improve vaccine uptake.

Methods: Descriptive and multilevel modeling of 6 rounds (weeks 22 to 27) of the U.S. Household Pulse survey (n = 443,680) conducted during January to March 2021. Limitations: Data collected when many respondents were not eligible for vaccination.

Implications: Vaccination promotion strategies may need to be tailored to the concerns of specific populations to improve vaccine uptake. 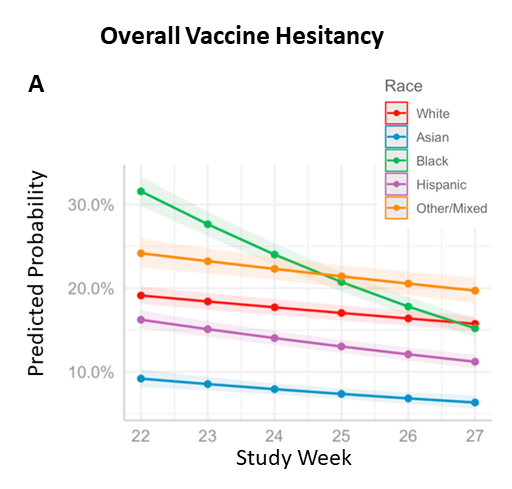 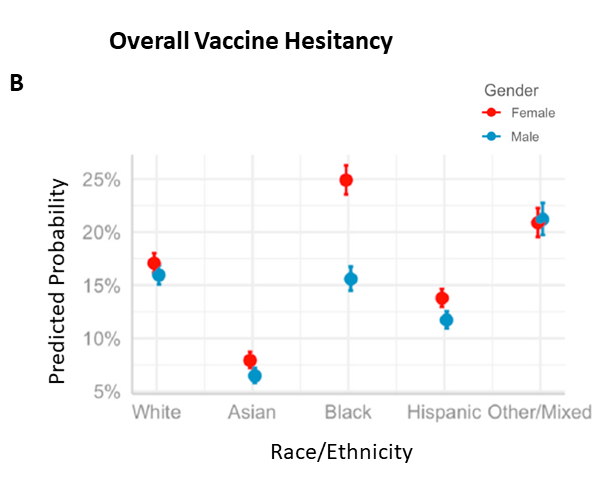 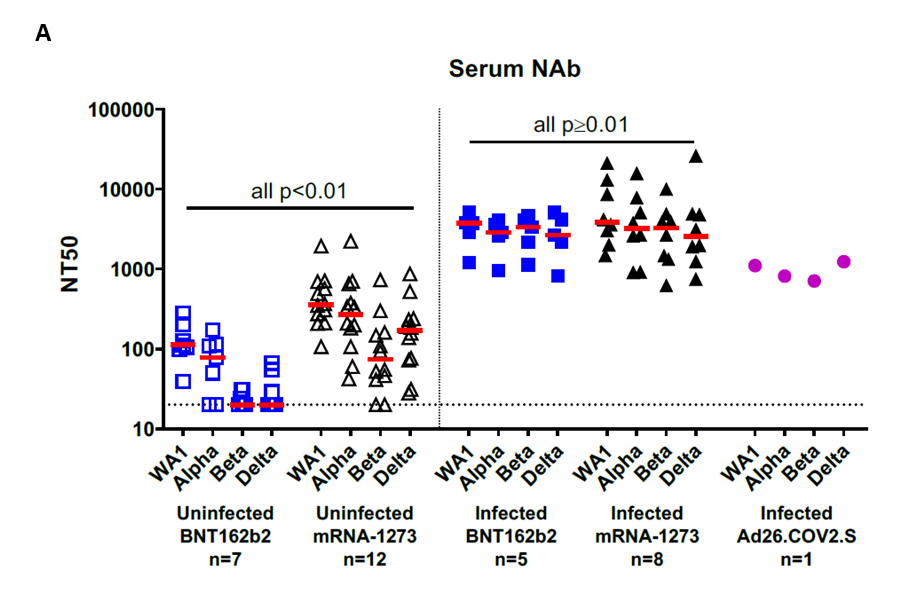 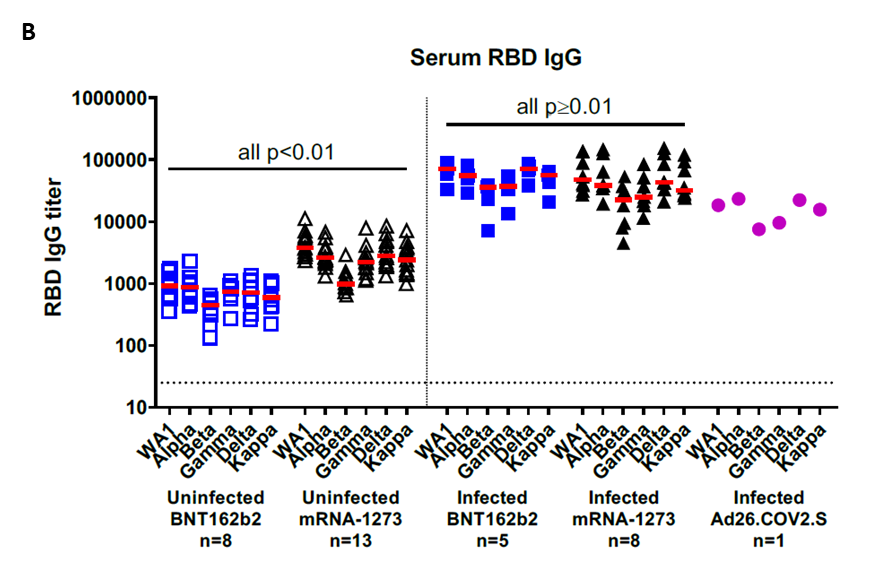 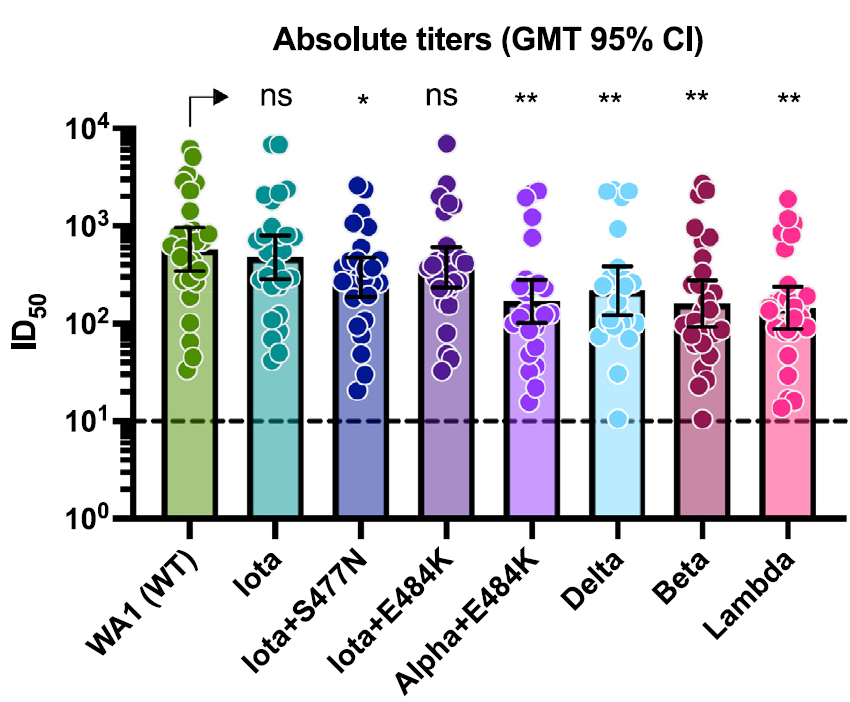 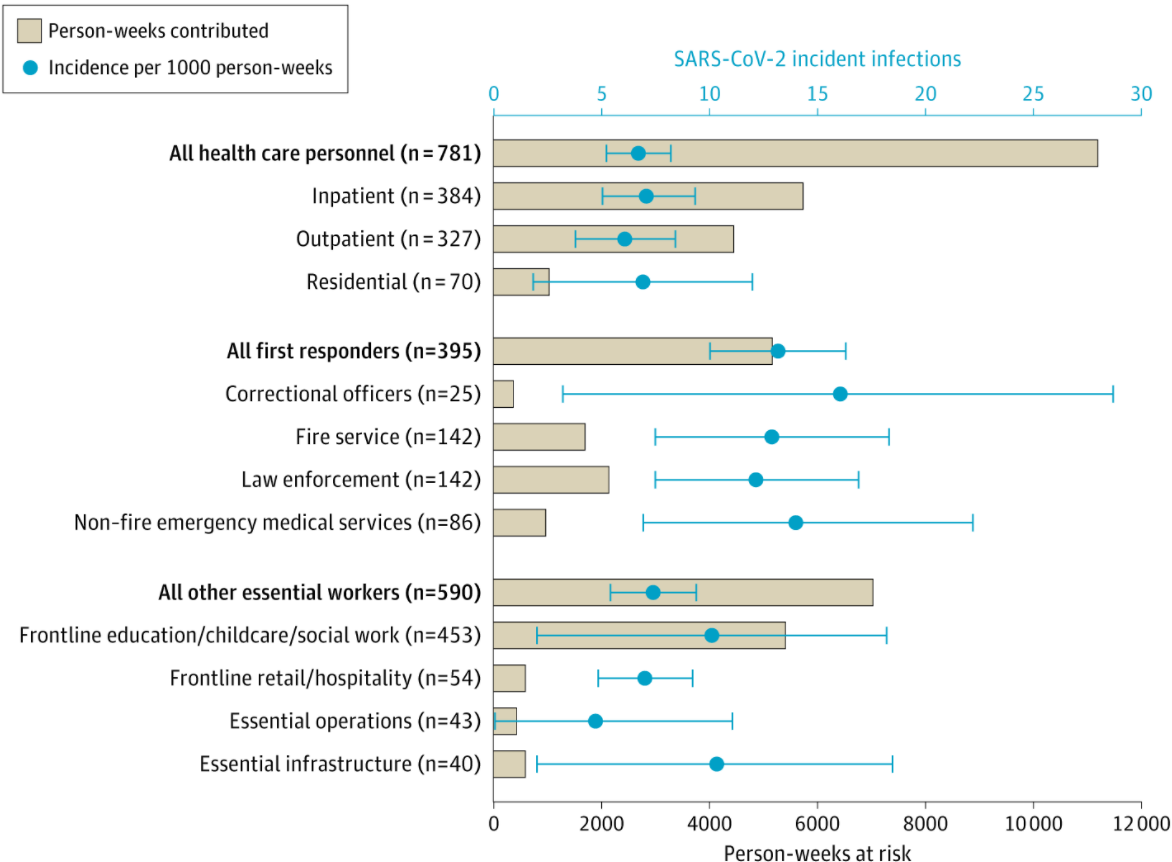 From the Morbidity and Mortality Weekly Report (October 29, 2021)