In This Update
Prevention, Mitigation and Intervention Strategies

Methods: A “susceptible-exposed-infected-recovered” (SEIR) model was fitted to UK epidemiological data to evaluate the effect of the UK vaccine rollout combined with lifting non-pharmaceutical interventions (NPI) to predict the reproduction number (R), COVID-19 daily deaths and hospital admissions between January 2021 and January 2024. Default assumptions for vaccine efficacy for symptomatic disease was 88% and vaccine uptake by age ranged from 75%–95%. The model also considered vaccine efficacy against infection which was varied from 0 to 85% and the spread of B.1.1.7. Limitations: Not considered: effects of waning immunity; variants of concern (VOCs) that escape immune response; varying vaccine efficacy by age.

Implications: Vaccination alone is unlikely to contain SARS-CoV-2. Gradual easing of non-pharmaceutical interventions in addition to high population uptake of a high-efficacy vaccine are necessary to prevent subsequent waves of infection. Monitoring of VOCs such as those that escape immune response (e.g., E484K mutation) will be necessary.

Note: Adapted from Moore et al. Estimated reproduction number (R) after NPI release for a given number of administered doses for 4 vaccine scenarios with varying infection prevention efficacy: 0%, 35%, 60%, and 85%. Model excludes any additional increase in immunity from natural infection (after 1/29/2021) and any effect on contact patterns resulting from NPIs. Licensed under CC-BY-NC-ND.

Methods: Retrospective cohort study of consecutive, adult patients (N = 39,156) asymptomatic for COVID-19 within a large US healthcare system who underwent pre-procedural SARS-CoV-2 screening between December 17, 2020, and February 8, 2021. Primary exposure was vaccination with at least one dose of Pfizer-BioNTech or Moderna vaccine prior to screening (median time from first dose to screening = 16 days). Adjusted relative risk (aRR) of positive SARS-CoV-2 molecular test was calculated adjusting for age, sex, race/ethnicity, and patient residence in Health Referral Region (local vs. non-local). Limitations: Unmeasured confounding among vaccinated individuals; generalizability may be limited as study participants were largely non-Hispanic white and <65 years; no longitudinal follow-up on symptom status post-procedure.

Implications: This study provides real-world evidence of a decrease in asymptomatic infection after vaccination with a mRNA vaccine and should be considered in developing post-vaccination policy recommendations.

Implications: The lack of efficacy of ChAdOx1 nCoV-19 against mild to moderate COVID-19 associated with the B.1.351 variant suggests that second generation vaccinations or boosters may be needed to address emerging variants of concern.

Top of Page
Detection, Burden, and Impact
Increased Mortality Associated with B.1.1.7 Variant

The SARS-CoV-2 variant of concern B.1.1.7 that was first identified in the UK in the fall of 2020 has become the dominant strain in the UK and parts of Europe and is increasing in prevalence across the US. The B.1.1.7 variant has been associated with increased transmission compared to the wild type lineage. The following two studies present findings regarding increased mortality of B.1.1.7.

Methods: Analysis of a dataset containing 2,245,263 positive SARS-CoV-2 PCR tests and 17,642 COVID-19 deaths from community-based testing in England between September 1, 2020 and February 14, 2021. Identification of the B.1.1.7 variant in infected individuals was confirmed by spike gene target failure status (SGTF). Absolute mortality risks and hazard of death were calculated after confirmation of SGTF status in numerous demographic subsets. Limitations: Could not completely assess SGTF status within study population; non-random sample. 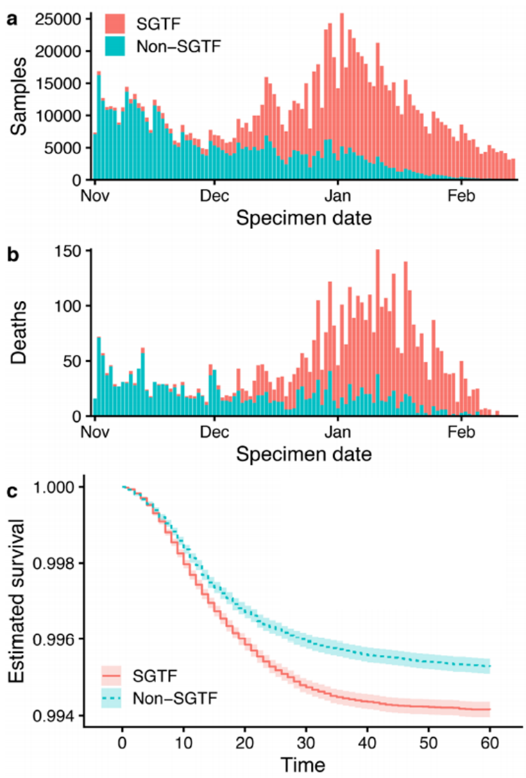 Methods: Cohort study among (n = 184,786) unvaccinated persons testing positive for SARS-CoV-2 between November 16, 2020, and January 11, 2021, in England. Spike gene target failure was used as a proxy for B.1.1.7 identification. Limitations: Selection bias might overestimate absolute mortality risks (if people with mild or asymptomatic infections were less likely to be tested); lead-time bias might underestimate relative mortality associated with B.1.1.7 given this variant was more prevalent later in the study period. 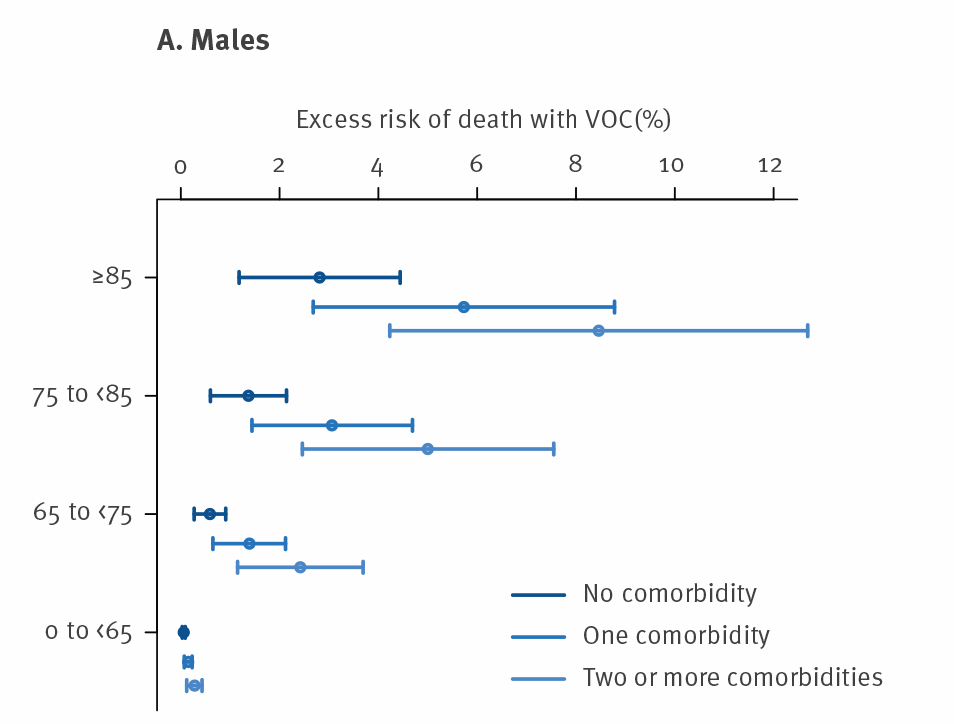 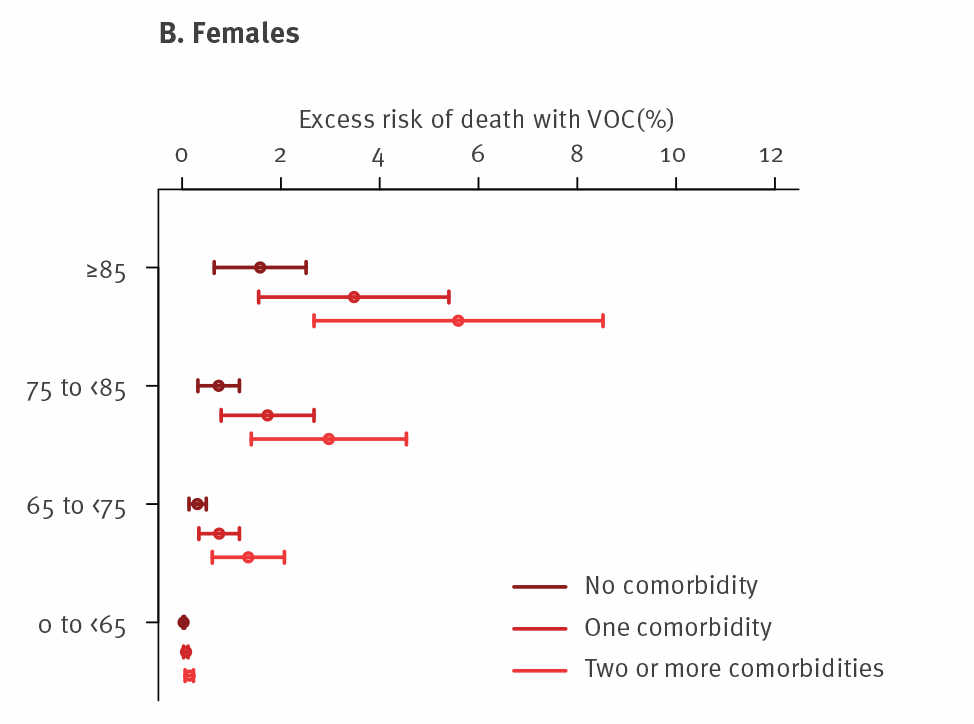 Note: Adapted from Grint et al. Excess risk of death by 28 days after positive test comparing SARS-CoV-2 VOC infection with non-VOC infection among males (A); and among females (B). Licensed under CC BY 4.0.

Implications for both studies (Davies et al. and Grint et al.): Both studies were consistent with Challen et alexternal icon., regarding the magnitude (~60%–70%) of the increased risk of mortality associated with the B.1.1.7 variant compared with other SARS-CoV-2 lineages such as the wild type. Other analyses indicating increased transmissibility of B.1.1.7 as well as the increasing spread of B.1.1.7 within the US highlight the need for rapid implementation of vaccination and continued implementation of non-pharmaceutical mitigation measures.

Methods: The nextclade toolexternal icon was used to identify B.1.1.33 lineage mutations among SARS-CoV-2 samples from Brazil sequenced by the Fiocruz COVID-19 Genomic Surveillance Network between March 12, 2020, and January 27, 2021; or that were available in Global Initiative on Sharing All Influenza Dataexternal icon as of March 1, 2021. Used Bayesian reconstruction to estimate timing of VOI N.9 emergence. Limitations: Effects of VOI N.9 on transmission, severity, diagnosis, and treatment of SARS-CoV-2 are unknown.

Implications: The E484K mutation has been associated with resistance to monoclonal antibodies and reduced neutralization potency of sera from convalescent and vaccinated individuals. The rapid dispersion of VOI N.9 across Brazil and the presence of the E484K mutation warrant monitoring for evidence of impact on effectiveness of treatments and vaccines, and surveillance for further spread, including in the US. 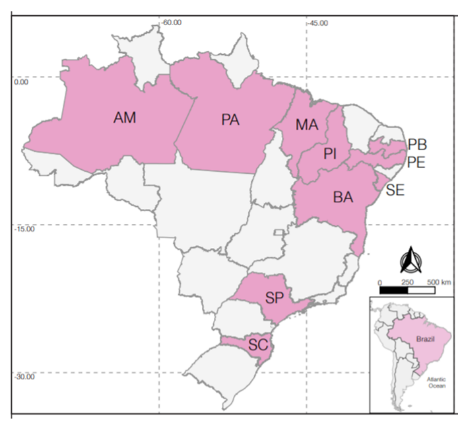 Note: Adapted from Resende et al. Geographic distribution of the VOI N.9 identified in Brazil (states are abbreviated per the ISO standard). Licensed under CC-BY-ND 4.0.

Assessment of protection against reinfection with SARS-CoV-2 among 4 million PCR-tested individuals in Denmark in 2020: a population-level observational study.external icon Hansen et al. The Lancet (March 17, 2021).

Methods: Analysis of Danish population-level cohort (n = 2,432,509) tested for SARS-CoV-2 by RT-PCR between February 26 and December 31, 2020. Calculated rate ratios (RRs) for persons testing positive among those with a positive or negative test ≥3 months earlier, adjusted for potential confounders. Estimated protection against repeat infection (1-RR). Findings pertain to the alternative cohort analysis that includes data from both surges.  Limitations: Potential selection bias in obtaining testing based on presumed risk; misclassification based on imperfect sensitivity and specificity of RT-PCR tests or on persistent infections counted as reinfections; unknown applicability of findings to reinfections with new SARS-CoV-2 variants.

Methods: Spanish prospective observational study of SARS-CoV-2 household transmission in children (<16 years) with COVID-19 (n = 1,040) and household contacts (n = 3,392); data were collected between July 1 and October 31, 2020. Index case was defined as first member of the household to develop symptoms or test positive for SARS-CoV-2. Two study periods were established, summertime (July 1–September 15) and school time (September 16–October 31). Limitations: Pediatric cases did not include children ≥16 years; index case definition may lead to underestimation of contribution of asymptomatic individuals; findings may be dependent of variant distribution at time of study.

Implications: Children, whether symptomatic or not, do not greatly contribute to household clusters of infection and are unlikely to be major drivers of the pandemic even if attending school. 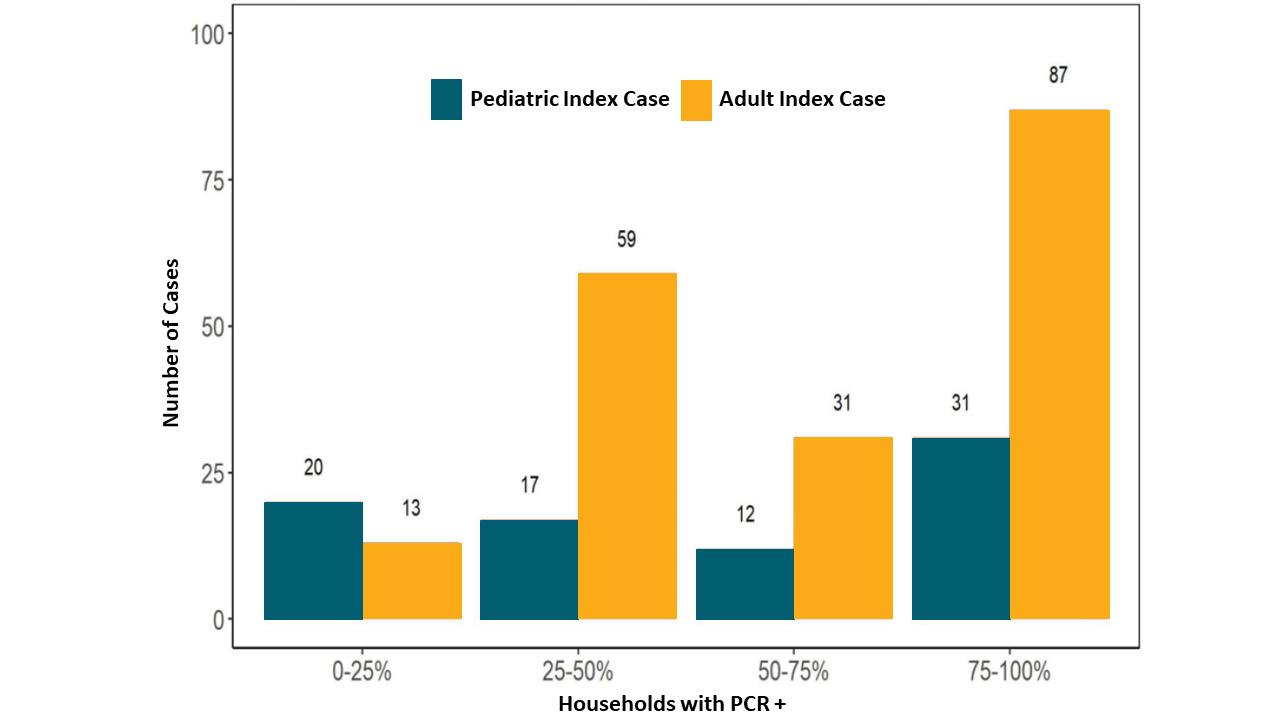 Note: Adapted from Soriano-Arandes et al. Percentage of positive SARS-CoV-2 RT-PCRs (pediatric vs. adult) in household by the age of the index cases. Permission request in process.

An observational cohort study on the incidence of SARS-CoV-2 infection and B.1.1.7 variant infection in healthcare workers by antibody and vaccination status.external icon Lumley et al. medRxiv (March 12, 2021).

Methods: Longitudinal cohort study of 1 versus 2 dose vaccine effectiveness among healthcare workers in England (n = 13,109) between April 23, 2020, and February 28, 2021. Vaccines include BNT162b2 (Pfizer-BioNTech; n = 8,285) and ChAdOx1 nCOV-19 (Oxford AstraZeneca; n = 2,738). The Thermo Fisher TaqPath PCR diagnostic assay was used to determine gene target failure, indicative of B.1.1.7. Incident rate calculated using Poisson regression model, adjusting for age, sex, occupational role, and temporal changes in incidence. Limitations: Findings might not be generalizable to the population; priority was given to staff who were at greater risk of SARS-CoV-2 infection; limited power to detect differences between vaccines.

Implications: Natural infection resulting in detectable antibodies and two vaccine doses provide protection against SARS-CoV-2 (re)infection, including against the B.1.1.7 variant. These findings could help inform post vaccination policies. 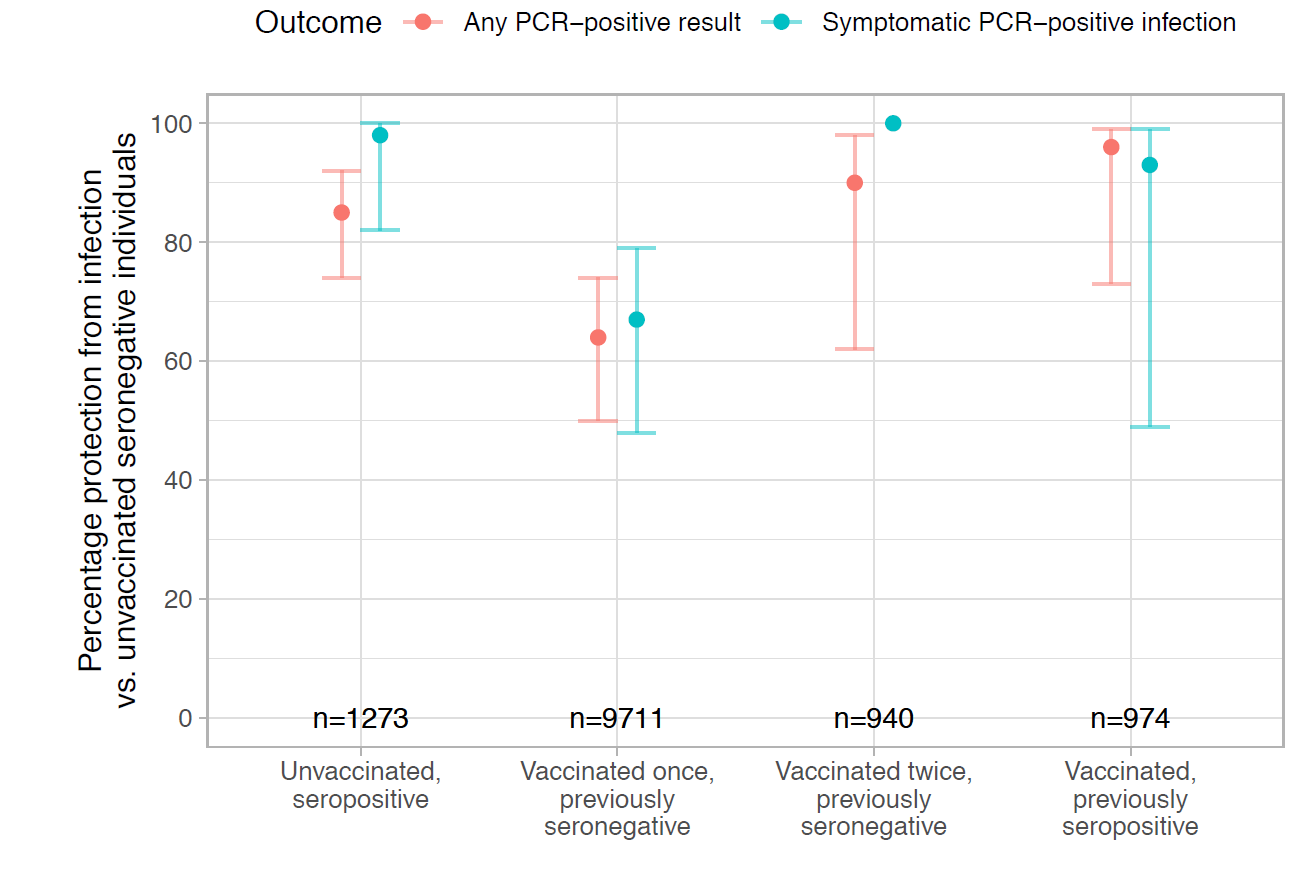 Note: Adapted from Lumley et al. Protection from infection by antibody and vaccination status, compared with seronegative individuals. Outcomes were either any PCR positive result or symptomatic PCR positive infection. The number of healthcare workers in each follow up group is shown. 95% confidence intervals are plotted, except for previously seronegative HCWs vaccinated twice who had no symptomatic PCR confirmed infections. Licensed under CC-BY 4.0. 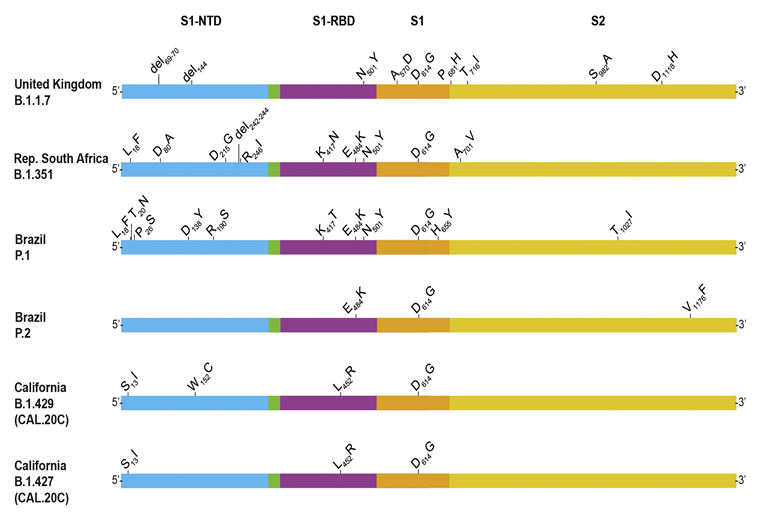 Note: Adapted from Long et al. Schematic showing structural changes present in the spike protein domains of major SARS-CoV-2 variants (S1-NTD, S1-RBD, S1, and S2). Reprinted from The American Journal of Pathology, online ahead of print. Long et al, Sequence analysis of 20,453 SARS-CoV-2 genomes from the Houston metropolitan area identifies the emergence and widespread distribution of multiple isolates of all major variants of concern. Copyright ©2021, with permission from Elsevier Inc. on behalf of the American Society for Investigative Pathology. 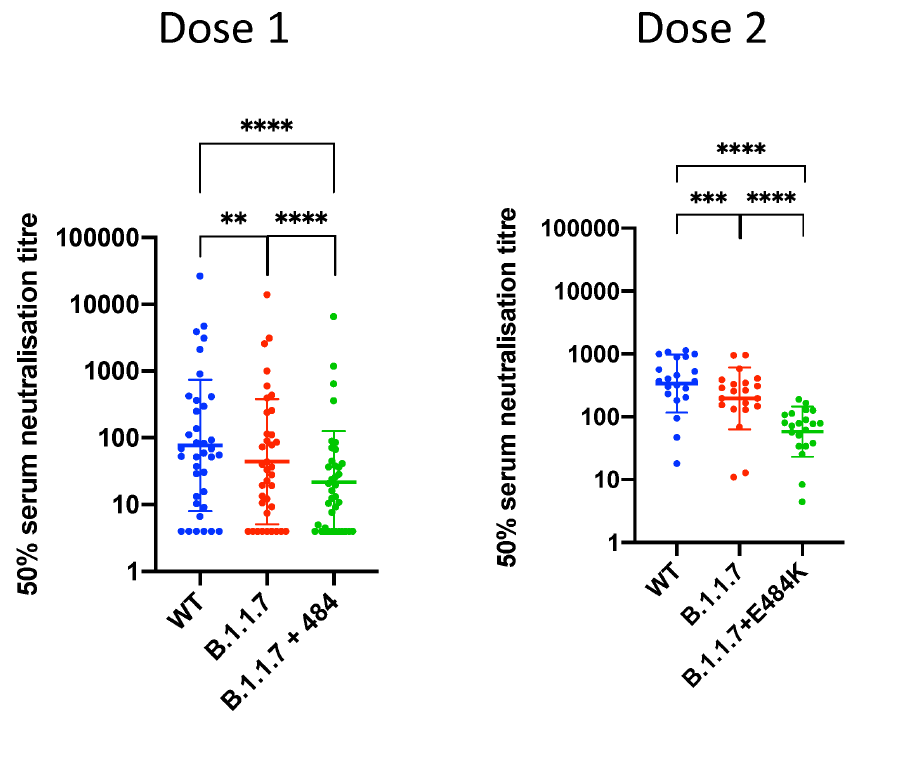 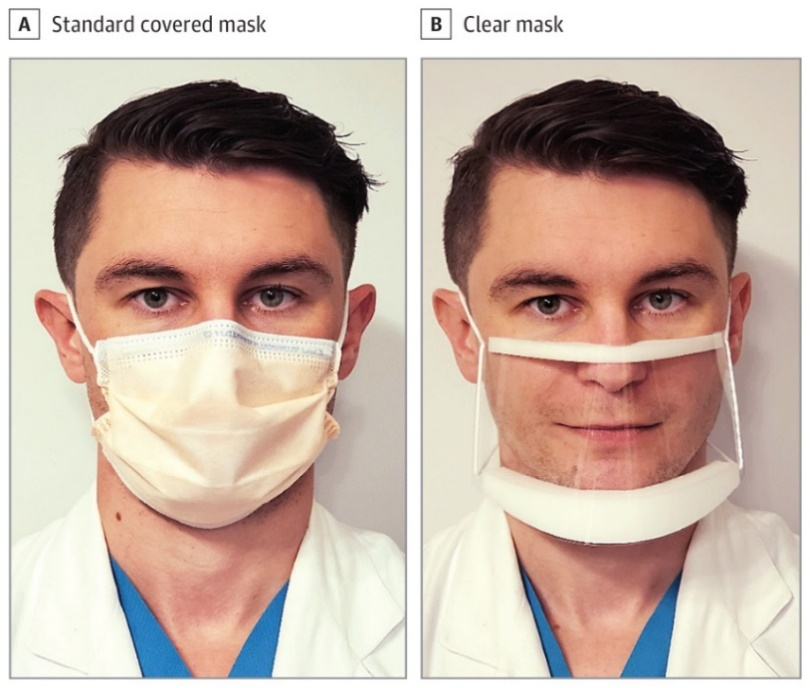