La Crosse encephalitis virus (LACV) is maintained in a cycle between Aedes triseriatus (the eastern treehole mosquito) and vertebrate hosts (especially small mammals such as chipmunks and squirrels) in deciduous forest habitats (i.e., forests with trees that lose their leaves each year). Humans can become infected with LACV from the bite of an infected mosquito, however humans rarely, if ever, develop high enough concentrations of LACV in their bloodstreams to infect feeding mosquitoes. Humans are therefore considered “dead-end” or incidental hosts for LACV.

Ae. triseriatus is an aggressive daytime-biting mosquito, especially in or near infested woods. True to its nickname, Ae. triseriatus normally lays its eggs in pools of water accumulated in treeholes, but it will also lay eggs in man-made water holding containers, particularly discarded tires. LACV is passed from the female mosquito to the eggs she lays. The virus can survive in dormant eggs through the winter and develop into infected, flying mosquitoes in the spring. 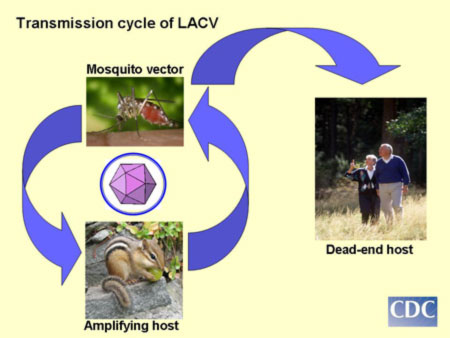