Prescription opioids are often used to treat chronic and acute pain and, when used appropriately, can be an important component of treatment. However, serious risks are associated with their use, and it is essential to carefully consider the risks of using prescription opioids alongside their benefits. These risks include misuse, opioid use disorder (addiction), and even overdoses and death.

Millions of Americans suffer from pain, and these patients are often prescribed opioids to treat their conditions. However, the dangers of prescription misuse, opioid use disorder, and overdose have been a growing problem throughout the United States.

Taking prescription opioids for longer periods of time or in higher dosages can increase the risk of opioid use disorder (addiction), overdose, and death. It is also important for patients and providers to discuss the risks of opioids, consider alternative therapies, and, if prescribing opioids is appropriate, the provider should offer fewer prescriptions for fewer days and at lower dosages.

The overall opioid prescribing rate in the United States peaked in 2010 and has been declining since 2012, but the amount of opioids in morphine milligram equivalents (MME) prescribed per person is still around three times higher than it was in 1999.2 MME is a way to calculate the total amount of opioids, accounting for differences in opioid drug type and strength.

In 2016, however, there were still almost 67 opioid prescriptions written for every 100 Americans.

There is wide variability at the county level in the amount of opioids received per resident. Counties with higher prescribing have been shown to have these characteristics:

Healthcare providers report concerns about opioid-related risks of addiction and overdose for their patients, as well as insufficient training in pain management. The 2016 CDC Guideline for Prescribing Opioids for Chronic Pain offers recommendations that may help to improve prescribing practices and ensure all patients receive safer, more effective pain treatment. Healthcare providers can also earn continuing education through this interactive training series called Applying the CDC Guideline for Prescribing Opioids.

When looking at overdose deaths from prescription opioids, CDC analyzes the following:

The most common drugs involved in prescription opioid overdose deaths include:

For people who died from prescription opioid overdose in 2016:

The highest overdose death rates from prescription opioids were in West Virginia, Maryland, Maine, and Utah.4

In March 2016, CDC released the CDC Guideline for Prescribing Opioids for Chronic Pain to ensure that patients have access to safer, more effective chronic pain treatment, while reducing the number of people who misuse opioids, develop opioid use disorder, or overdose. The Guideline focused on the prescribing of opioid pain medication to patients 18 years and older in primary care settings outside of active cancer treatment, palliative care and end of life care.

CDC is evaluating implementation of the Guideline by providers, health systems, and insurers with the goal of identifying how the recommendations are being applied, and potential barriers to implementation. 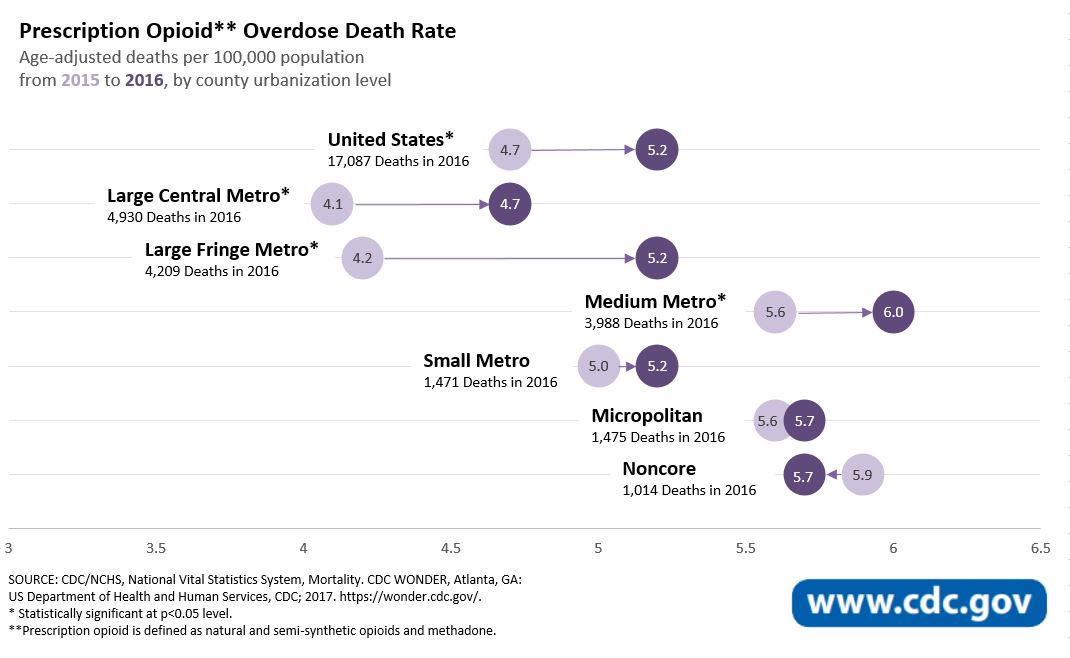 Age-adjusted death rates for prescription opioids are plotted above by urbanization classification of residence for 2015 to 2016. Rates increased significantly for large central metro (14.6%), large fringe metro (23.8%), and medium metro (7.1%) areas. The prescription opioid overdose death rate also increased in the United States overall—a statistically significant 10.6% increase from 2015 to 2016, with a total of 17,087 deaths in 2016. Deaths are classified using the International Classification of Diseases, Tenth Revision (ICD–10). Drug overdose deaths are identified using underlying cause-of-death codes X40–X44, X60–X64, X85, and Y10–Y14. Drug overdose deaths, as defined, that have prescription (natural and semi-synthetic) opioids (T40.2) or methadone (T40.3) as a contributing cause. Age-adjusted death rates were calculated using the direct method and the 2000 standard population.1